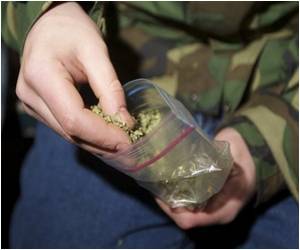 Abnormal changes in brain structures related to working memory were observed in teens who were heavy marijuana users, shows study.

The brain abnormalities and memory problems were observed during the individuals' early twenties, two years after they stopped smoking marijuana, which could indicate the long-term effects of chronic use. Memory-related structures in their brains appeared to shrink and collapse inward, possibly reflecting a decrease in neurons.


This is the first study to target key brain regions in the deep subcortical gray matter of chronic marijuana users with structural MRI and to correlate abnormalities in these regions with an impaired working memory. Working memory is the ability to remember and process information in the moment and -- if needed -- transfer it to long-term memory. Previous studies have evaluated the effects of marijuana on the cortex, and few have directly compared chronic marijuana use in otherwise healthy individuals and individuals with schizophrenia.
Advertisement
The younger the individuals were when they started chronically using marijuana, the more abnormally their brain regions were shaped, the study reports. The findings suggest that these regions related to memory may be more susceptible to the effects of the drug if abuse starts at an earlier age.

"The study links the chronic use of marijuana to these concerning brain abnormalities that appear to last for at least a few years after people stop using it," said lead study author Matthew Smith, an assistant research professor in psychiatry and behavioral sciences at Northwestern University Feinberg School of Medicine. "With the movement to decriminalize marijuana, we need more research to understand its effect on the brain."

The paper will be published Dec. 16 in the journal Schizophrenia Bulletin.

In the U.S., marijuana is the most commonly used illicit drug and young adults have the highest -- and growing -- prevalence of use. Decriminalization of the drug may lead to greater use.

Because the study results examined one point in time, a longitudinal study is needed to definitively show if marijuana is responsible for the brain changes and memory impairment. It is possible that the abnormal brain structures reveal a pre-existing vulnerability to marijuana abuse. But evidence that the younger a subject started using the drug the greater his brain abnormality indicates marijuana may be the cause, Smith said.

Few studies have examined marijuana's effect on the deep regions in the brain -- the 'subcortical gray matter' below the noodle-shaped cortex. The study also is unique in that it looked at the shapes of the striatum, globus pallidus and thalamus, structures in the subcortex that are critical for motivation and working memory.

The Marijuana and Schizophrenia Connection

Chronic use of marijuana may contribute to changes in brain structure that are associated with having schizophrenia, the Northwestern research shows. Of the 15 marijuana smokers who had schizophrenia in the study, 90 percent started heavily using the drug before they developed the mental disorder. Marijuana abuse has been linked to developing schizophrenia in prior research.

"The abuse of popular street drugs, such as marijuana, may have dangerous implications for young people who are developing or have developed mental disorders," said co-senior study author John Csernansky, M.D., chair of psychiatry and behavioral sciences at Northwestern University Feinberg School of Medicine and Northwestern Memorial Hospital. "This paper is among the first to reveal that the use of marijuana may contribute to the changes in brain structure that have been associated with having schizophrenia."

Chronic marijuana use could augment the underlying disease process associated with schizophrenia, Smith noted. "If someone has a family history of schizophrenia, they are increasing their risk of developing schizophrenia if they abuse marijuana," he said.

While chronic marijuana smokers and chronic marijuana smokers with schizophrenia both had brain changes related to the drug, subjects with the mental disorder had greater deterioration in the thalamus. That structure is the communication hub of the brain and is critical for learning, memory and communications between brain regions. The brain regions examined in this study also affect motivation, which is already notably impaired in people with schizophrenia.

"A tremendous amount of addiction research has focused on brain regions traditionally connected with reward/aversion function, and thus motivation," noted co-senior study author Hans Breiter, M.D., professor of psychiatry and behavioral sciences and director of the Warren Wright Adolescent Center at Feinberg and Northwestern Memorial. "This study very nicely extends the set of regions of concern to include those involved with working memory and higher level cognitive functions necessary for how well you organize your life and can work in society."

"If you have schizophrenia and you frequently smoke marijuana, you may be at an increased risk for poor working memory, which predicts your everyday functioning," Smith said.

Uruguay: First Country in World to Legalize Marijuana
Uruguay has become the first country to legalize marijuana in a bid to fight against drug ......