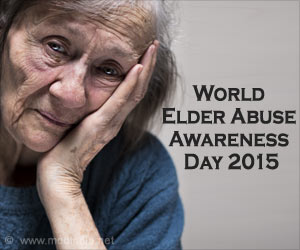 The number of older people aged 60 and above is estimated to rise from 542 million in 1995 to about 1.2 billion in 2025. With the rapidly ageing populations, the incidence of abuse towards older people is also set to rise, says the United Nations (UN).

Elder abuse is defined as intended or unintended actions that cause harm to an elder. This includes failure by a caregiver to ensure the basic needs of an elder or to save the elder from harm.


According to the UN data, more than 500,000 are believed to be abused each year in the United States alone. The UN notes that the current available numbers are likely an underestimate because most of the elders are reluctant to report abuse themselves because of their physical and mental inability and fear of retaliation from the caregivers. Some elders think that they don't want to get the abuser in trouble as 90% of abusers are elder's own family members.


Urging the nations across the globe to voice against the elder abuse and create awareness on the abuse, the UN General Assembly in 2006 announced June 15 as World Elder Abuse Awareness Day.

The awareness day acknowledges the significance of elder abuse as a public health and human rights issue.

Speaking ahead of the World Elder Abuse Awareness Day 2015, a group of the UN human rights experts said that elder adults have rights and must be able to live free from abuse and with dignity and respect.

"Our older generation is still subject to different forms of abuse and violence on a daily basis, even though innovative policies and programs have been adopted by many countries at the national level," said Rosa Kornfeld-Matte, the Independent Expert mandated by the UN Human Rights.

Rashida Manjoo, the UN Special Rapporteur on violence against women, said that older women are more vulnerable than men to violence and abuse.

"But the ways that older women's rights are abused and the forms of violence affecting them have been so far seriously overlooked and neglected. The array of forms of violence against older women, as well as the fact that this violence frequently occurs at the intersection of different types of discrimination, calls for the adoption of multidimensional strategies to effectively prevent and fight this violence," Manjoo said.

Kornfeld Mattem, the UN Independent Expert on elder abuse said that implementation and enforcement are still not to sufficient to prevent, criminalize and eradicate such disgraceful practices against older persons in most of the countries.

"It is time for effective action. Urgent action must be taken to put an end to such a pressing and global issue that destroys lives and families in all regions, in developing and developed countries. On World Elder Abuse Awareness Day 2015, we call on all governments and civic society organizations to renew their commitment to fight against all forms of abuse and violence against older persons," Mattem said, recalling the duties on all nations to eradicate elder abuse, through legislation, policies and preventive strategies.

A survey conducted by NGO Agewell Foundation in 2015 found that on an average, 25-30% elderly population face abuse each year in India.

A study released on June 15, 2015 by Help Age India, a leading NGO working to secure senior citizens' rights, reported that of the elderly who faced abuse, about 35% said they were abused at least 'once a week', around 20% faced abuse 'once a month' and only 17% were abused daily in 2014.

Guwahati, the largest city of Assam, reported one of the highest rates of elders' abuse among 12 Tier II cities in the country.

In the city, around 71% of elderly people were faced abuse on a daily basis. Another 21% reported to have faced it weekly and only six per cent on a monthly basis last year.

Among the perpetrators, the study said around 74% were reported to be the sons in the family. Besides, 62% of the daughters-in-law were involved in such abusive acts, the NGO reported.

Among the types of elder abuse, about 68% was 'verbal'.

The report also highlighted that 59% among the elder victims of abuse chose not to report the incidents to either police or any government agencies. Most of the elders think it is the family matter.

Geriatric specialist Dr VS Natarajan in the country said that authorities should create awareness among the public to prevent elder abuse. "Now, about 2-3% of elders move out of their house voluntarily because they face physical, verbal and mental abuse. Also, there has been a change in the stance of youngsters over the last decade and they think of elders as a burden," said Dr Natarajan.

There are many different forms of elder abuse. Some involve threats against the elderly and some involve financial deception. The most common are defined below:

Physical elder abuse is an intended action against an elderly person that results in physical pain or injury. Such abuse includes not only physical assaults such as hitting but also restraining or confining an elder.

In this abuse, caregivers speak to or treat elderly persons in ways that result in emotional pain or grief.

Intimidation through yelling, humiliation and ridicule and habitual blaming are the verbal forms of emotional or psychological abuse.

Sexual elder abuse is sexual contact with an older adult without the elder's consent. Other forms of elder sexual abuse are showing an elderly pornographic material, forcing them to watch sex acts, or forcing the elder to undress.

The financial exploitation is defined as unauthorized use of an old person's money or property, either by a caregiver or others.

A dishonest caregiver might misuse an elder's wealth such as personal checks, credit cards and household goods. Cases of forging the elder's signature have also been reported as financial exploitation.

How to Prevent Elder Abuse

The three essential steps to prevent elder abuse are listening to elder adults and their caregivers, intervening when you think elder abuse is taken place and creating awareness among people how to recognize and report elder abuse.

What You can Do as a Caregiver to Prevent Elder Abuse

If you find it too hard to take care of your elder one in your family, requesthelp from friends or relatives or local care agencies instead of crossing the line into elder abuse. Also find a support group for caregivers of the elderly.

Pressure of taking care of an elderly person might lead you to depression and stress. If necessary, get medical care for yourself and adopt stress reduction practices.

Caregivers can use elder abuse help lines, which also offer help for caregivers. Call a help line to get tips to take care of elders in your family.

Protecting Yourself as an Elder against Abuse

If you are not happy with the care you are receiving, even if it is in your own home or in any other old age facilities, speak up. Tell your doctor, a friend, or a family member whom you trust. Use elder abuse help line to report the crime. If you can't use help line service, tell someone you trust to do it.

Pattern of Viral Hepatitis in the Elderly
Viral hepatitis is inflammation of the liver caused by one of the five hepatotropic viruses. It can manifest itself in two forms - acute or chronic.
READ MORE

Fluid and Electrolyte Abnormalities Common in Elderly
Elderly people are commonly susceptible to fluid and electrolyte balance due to age-related changes, diseases and medications.
READ MORE