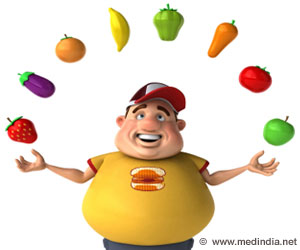 Obesity is linked to certain epigenetic modifications of DNA which in turn increases risk of certain problems associated with weight gain such as coronary artery disease.

Though obesity has been linked to genetic variants, lifestyle factors, and gene-environment interactions, these findings do not fully explain the difference in people's body mass index (BMI) or why some overweight people develop health complications while others don't.

A large study from Boston Children's Hospital, the University of Edinburgh, the Harvard School of Public Health, the Framingham Heart Study and the National Heart, Lung, and Blood Institute (NHLBI) provides more insight into this finding.


The study is one of the largest to date to examine the link between BMI, obesity-related disease and DNA methylation, which is a type of epigenetic modification that influences whether genes are turned on or off.

Quiz on Obesity
"We are indeed much more than what we eat, but what we eat can nevertheless help us to be much more than what we are". - Adelle Davis There are thousands out there battling 'the bulge'. With childhood obesity on the rise even children are not spared. If your weight issues are threatening to weigh you down learn more about obesity by taking part in this quiz.
Advertisement
Obesity

Though preventable, obesity is highly prevalent in developed nations and contributes to a substantial burden of morbidity and mortality.

In the same year, 41 million children under 5 years of age were overweight or obese.

"Even though we've genetically sequenced more and more people at greater and greater breadth and depth, we haven't completely explained who develops obesity and why," says Michael Mendelson, MD, ScM, a pediatric cardiologist with the Preventive Cardiology Program at Boston Children's Hospital.

"We found that obesity is related to widespread changes in DNA methylation. Unlike your DNA sequence, these regulatory modifications change over time and can influence your risk of disease in later life." Mendelson added.

For the study, the researchers looked for markers of DNA methylation at more than 400,000 sites in the genome from blood samples from 7,800 adults from the Framingham Heart Study, the Lothian Birth Cohort and three other population studies.

They then checked if these markers differed according to BMI in a predictable pattern.

Their analysis revealed strong associations between BMI and DNA methylation at 83 locations in 62 different genes.

The differences in the expression of genes involved in energy balance and lipid metabolism was due to the methylation at these sites.

The more the changes in methylation, the greater their BMI.

A higher methylation score increased the odds ratio for obesity was 2.8 times higher.

Difference in methylation at one gene, SREBF1, appeared to be causative of obesity and was clearly linked with unhealthy blood lipid profiles, glycemic traits which is a risk factor for diabetes and coronary artery disease. This could be a new target for a drug treatment.

"Taken together, these results suggest that epigenetic modifications may help identify therapeutic targets to prevent or treat obesity-related disease in the population," says Mendelson, who is also a research fellow in the Population Sciences Branch of the NHLBI. "The next step is to understand how we can modify epigenetic modifications to prevent the development of cardiometabolic disease."

"We've known for a long time that people who are overweight or obese are more likely to develop metabolic risk factors like diabetes, lipid abnormalities and hypertension," adds study coauthor Daniel Levy, MD, the director of the Framingham Heart Study, which is supported by the NHLBI.

"This study may help us understand the molecular mechanism linking obesity to metabolic risk, and that knowledge may pave the way for new approaches to prevent even more dire complications such as cardiovascular disease." Levy added.

The findings were published online January 17 by PLoS Medicine.

Facts about Obesity
Obesity is a growing global health problem. Obesity is defined as abnormal or excessive fat accumulation that may damage your health.

Researchers Predict Sharp Rise In Obesity-Linked Conditions Among Children
Researchers estimate that by 2025, around 91 million children are bound to get obese at a global level.