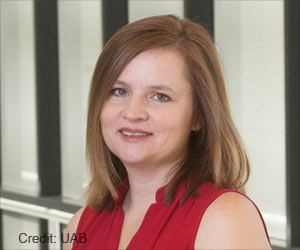 A key mechanism describing how internal biochemical clock signals get turned into changes in external electrical firing activity, have been identified.

Molecular clocks in cells throughout the body control many physiologic changes in a 24-hour day/night circadian rhythm, among them are the timing of sleep and wakefulness.

The master pacesetter for those clocks resides in a tiny part of the human brain, where about 42,000 nerve cells spontaneously and independently maintain a 24-hour cycle through rhythmic internal surges and falls of biochemical signals


But nerve cells communicate to each other via external electrical impulses.

The study was led by Karen Gamble, Ph.D., associate professor in the University of Alabama at Birmingham Department of Psychiatry and Behavioral Neurobiology, and is paper published in Nature Communications.

Effects of Circadian Rhythms and Sleep Deprivation Vary Across Brain Regions
Lack of sleep can affect the brain and reduce work performance. A new study explains how the brain is locally affected by internal time of day and sleep-wake cycles.
Advertisement
It involves the activity of a kinase enzyme called GSK3 that changes the excitability, a technical term for the likelihood of a nerve cell to fire an electrical impulse, of those neurons.

Identification of this role for GSK3 raises clinical interest because GSK3 is the target of lithium and other mood-stabilizing drugs used to treat bipolar disorder.

Also, the sodium channels that were found to be regulated by GSK3 are the target of riluzole, a drug used to treat amyotropic lateral sclerosis, known as ALS or Lou Gehrig's disease, as well as anxiety disorders and depression.

Thus, an understanding of how the GSK3 enzyme alters excitability may offer new approaches to understand and treat mood disorders.

"GSK3 is basically a linking molecule that can connect molecular changes inside the cell to excitability," Gamble said.

The intrinsic clock resides in the suprachiasmatic nuclei of the hypothalamus, or SCN, which sits at the bottom of the brain.

The GSK3 activity in the cells rises and falls on a 24-hour cycle.

The external behavior of the SCN cells also rises and falls every 24 hours -- the nerve cells fire rapid electrical impulses in the day and are quiet at night.

GSK3, or glycogen synthase kinase 3, turns out to be a key to those electrical changes.

Because its activity changes with the circadian rhythm, targeting GSK3 with drugs will have different effects depending on the time of day the drug is taken.

This daily timing of treatments to maximize health benefits and minimize side effects is called chronotherapeutics.

Details of Mechanism of GSK3 activity

They found that GSK3 activity regulates a certain movement of sodium ions across the membrane of SCN nerve cells, a flow that is called the persistent sodium current.

Flows of positive or negative ions such as sodium, potassium and calcium across the membrane are basically electrical currents.

The persistent sodium current is a weak, slowly developing current, but changes in its magnitude can make the nerve cell more likely to fire the massive flow of ions that creates the electrical impulses to signal other nerves.

Such electrical impulses -- known as action potentials -- are the signals the brain uses to convey, receive and analyze information.

Until now, the persistent sodium current has largely been overlooked as a potential contributor to the circadian modulation of rhythmic firing.

This study is the first to show that the persistent sodium current is greater in magnitude during the day versus at night.

Experimental results from the SCN were fed into a mathematical model created by colleagues at the University of Michigan.

The model unexpectedly predicted that, as a change in persistent sodium current increased the firing rate of neurons, it would not alter another measure of the electrical state of neurons called the resting membrane potential, which is the balance of ions inside and outside of the cell.

This prediction was experimentally confirmed, and it is important because changes in the resting membrane potential act as a feedback to shift the 24-hour clock forward or back in time, such as resetting the circadian clock after a jet-lag flight to a different global time zone.

The model also successfully predicted that the increased excitability resulting from the increased persistent sodium current is caused by another change across the nerve cell membrane, suppression of the action potential after-hyperpolarization.

New Revelation may Help Scientists Develop Treatments for Mood Disorders
By finding how sodium influences a major call of brain cell receptors, scientists speculate that this revelation may pave way for development of new treatments for brain disorders

Mood Disorders like Depression, Bipolar in Women Affects Their Cognitive Control
Brain scans showed that women with depression had different levels of activity than healthy women in the right posterior parietal cortex area of the brain.