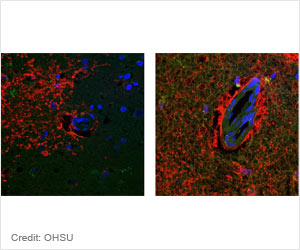 A new membrane protein in the brain, known as aquaporin-4 has been examined by researchers.

This discovery may pave way for treatment and prevention of Alzheimer's disease in future.

Risk Factors for Alzheimers Disease
Cognitively normal adults exhibiting atrophy of their temporal lobe or damage to blood vessels in the brain are more likely to develop Alzheimer's disease.
Advertisement
‘Identifying the form and function of the membrane protein aquaporin-4 will help in the development of medication needed to treat and prevent the progress of Alzheimers disease.’

The study is published in the journal JAMA Neurology.

They discovered that among older adults who did not suffer from Alzheimer's Disease, aquaporin-4 was prevalent.

Alzheimers Disease
Alzheimer''s disease is a progressive neurodegenerative disease affecting memory and thinking and making the person increasingly dependent on others.
Advertisement
"It suggests that aquaporin-4 might be a useful target in preventing and treating Alzheimer's disease," said senior author Jeffrey Iliff, Ph.D., an Assistant Professor in the Department of Anesthesiology and Perioperative Medicine in the OHSU School of Medicine. "However, we aren't under any illusion that if we could just fix this one thing, then we'd be able to cure Alzheimer's Disease."

Alzheimer's is a progressive, neurodegenrative disease, that is most often associated with aging. It is characterized by the formation of plaques and tangles in the brain cells. It destroys an individual's ability to reason, remember, imagine and learn.

About 44 million people worldwide are affected with Alzheimer's disease and by 2030, this number may rise to 76 million.

One in 6 women of age 65 years has a chance of developing this condition compared to one in 11 men.

The disease has no known cure but there are treatments available for some of its symptoms.

The brain-wide network of channels is collectively known as the glymphatic system. Aquaporin-4 is a key part of this system.

The role of Aquaporin-4 is to allow cerebral-spinal fluid from outside the brain to wash away proteins such as amyloid and tau that otherwise build up within the brain.

Accumulation of these proteins are seen in people suffering from Alzheimer's, which plays a role in destroying neurons in the brain gradually.

"This system, and the failure of the system, may be one of many things that goes wrong in people with Alzheimer's disease," Iliff said.

The study closely examined 79 brains donated through the Oregon Brain Bank, a part of the OHSU Layton Aging and Alzheimer's Disease Center.

They were divided into three groups:
Prevalence of aquaporin-4

Results showed that the brains of people younger than 60 years and older people without Alzheimer's had presence of well organized aquaporin-4 protein, lining the blood vessels of the brain.

However in the brains of older people with Alzheimer's, the aquaporin-4 protein appeared disorganized.

This may explain why these brains are unable to wash away proteins like amyloid beta, which leads to their accumulation and hence disease progression.

The study concluded that future research focusing on the form or function of aquaporin-4 may ultimately lead to medication to treat or prevent Alzheimer's disease.

Anti-dementia Drug Memantine Linked to Pneumonia Risk
Alzheimer's drug memantine is associated with an increased risk of pneumonia compared to other anti-dementia drugs.

Find a Hospital Hearing Loss Calculator Blood Pressure Calculator Sanatogen Drug - Food Interactions Find a Doctor Nutam (400mg) (Piracetam) Blood Donation - Recipients Pregnancy Confirmation Calculator The Essence of Yoga
This site uses cookies to deliver our services. By using our site, you acknowledge that you have read and understand our Cookie Policy, Privacy Policy, and our Terms of Use