Written by Madhumathi Palaniappan
Medically Reviewed by The Medindia Medical Review Team on May 3, 2017 at 3:23 PM 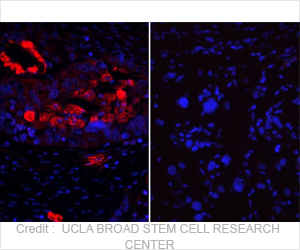 Around 85% of women are found to experience recurrence of high-grade serious ovarian cancer, after treatments with chemotherapy drugs like carboplatin.

A preclinical research from Dr. Sanaz Memarzadeh, member of the Eli and Edythe Broad Center of Regenerative Medicine and Stem Cell Research at UCLA have found combination therapy to be effective in up to 50% of the women with ovarian cancer.

The research study published in the journal Precision Oncology suggested that a combination therapy of carboplatin drug along with an experimental drug birinapant helped in improving the survival of mice with ovarian cancer tumors.


The findings of the study also revealed that testing a specific protein could help to identify ovarian tumors for which the treatment could be effective.

Hormonal Maintenance Therapy Improves Survival Rate in Ovarian Cancer
Study assesses the outcomes associated with hormonal maintenance therapy (HMT) in low-grade serous carcinoma.
Advertisement
The treatments may also target cancers which would affect other parts of the body that include bladder, cervix, colon and lung cancer.

Previous Research
The research team had uncovered and isolated carboplatin-resistant ovarian cancer stem cells in 2015. The cells were found to have high levels of proteins called cIAPs (cellular inhibitors of apoptosis proteins) that could prevent cell death after chemotherapy.

Memarzadeh, director of the G.O. Discovery Lab and member of the UCLA Jonsson Comprehensive Cancer Center, said, "I've been treating women with ovarian cancer for about two decades and have seen firsthand that ovarian cancer treatment options are not always as effective as they should be."

"Our previous research was promising, but we still had questions about what percentage of tumors could be targeted with the birinapant and carboplatin combination therapy, and whether this combination could improve overall survival by eradicating chemotherapy-resistant ovarian cancer tumors."

New Research Study
In the new research study, scientists first tested whether the combination therapy could improve survival in mice. Around half of the mice had carboplatin-resistant human ovarian cancer tumors and the other half had carboplatin-sensitive tumors.

The research team administered birinapant or carboplatin as well as the other two drugs combined and then monitored the mice over time.

The findings showed that birinapant or carboplatin alone had minimal effect and the combination therapy may double the overall survival in half of the mice irrespective of whether they had carboplatin-resistant and carboplatin-sensitive tumors.

Rachel Fujikawa, fourth year undergraduate student in Memarzadeh's lab, said, "Our results suggest that the treatment is applicable in some, but not all, tumors."

Efficacy of the Combination Therapy
The effectiveness of the combination therapy in tumors was studied by a 23 high-grade serous ovarian cancer tumors from the independent patients. Some of them who had never been treated with carboplatin and some were patients who had carboplatin-resistant cancer.

The research team generated ovarian cancer tumors utilizing a method called disease-in-a-dish modeling and then tested the same treatment which was previously tested in mice.

The study findings once again revealed that, carboplatin or birinapant had only minimal effect while the combination had successfully eliminated the ovarian cancer tumors in approximately 50% of the samples. It is also to be noted that the combination therapy worked for both the carboplatin-resistant and carboplatin-sensitive tumors.

Scientists measured the levels of cIAPs and found a strong correlation between cancer stem cells with high levels of cIAP, and also a positive response to the combination therapy.

Elevated levels of cIAPs were found to be linked to chemotherapy resistance in other cancers as well. The research team also wondered if the combination therapy could effectively target those cancers as well.

The research team created a disease-in-a-dish model using a human bladder, cervix, colon, lung cancer cells and then tested the combination therapy. The findings were similar to ovarian cancer and around 50% of the tumors showed a positive response to chemotherapy.

Memarzadeh, gynecologic oncology surgeon and professor at the David Geffen School of Medicine at UCLA, said, "I believe that our research potentially points to a new treatment option. In the near future, I hope to initiate a phase 1/2 clinical trial for women with ovarian cancer tumors predicted to benefit from this combination therapy."