Written by Madhumathi Palaniappan
Medically Reviewed by The Medindia Medical Review Team on May 3, 2017 at 5:39 PM 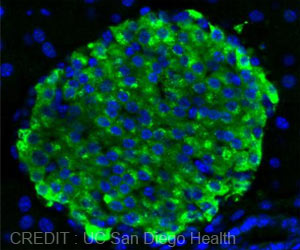 Pancreatic beta cells may help to maintain the normal blood glucose levels by producing the insulin hormone. A research team from the University of California San Diego School of Medicine, used single-cell RNA sequencing to map pathways that would regulate the beta cell growth to trick them to regenerate.

The study findings were published in the journal Cell Metabolism.

Insulin Study Could Lead to Better Products in Regulating Metabolism of Diabetics
A joint study that has shed new light on insulin and its structure could lead to development of new insulin products.
Advertisement
‘Mapping the pathways that regulate beta cell growth would provide new insights on drug targets for diabetes treatment.’

Maike Sander, "If we can find a drug that makes beta cells grow, it could improve blood sugar levels in people with diabetes," said Maike Sander, MD, professor in the Department of Pediatrics and Cellular and Molecular Medicine at UC San Diego School of Medicine.


"These people often have residual beta cells but not enough to maintain normal blood glucose levels."

Type 2 Diabetes
Globalization and changing lifestyles has made diabetes very common in developing countries so much so that India is known as the Diabetes Capital of the World.
Advertisement
Beta cells that are capable of dividing are rare, except for only 1% of all the beta cells. Scientists have investigated new molecular pathways which could govern the beta cell growth in hopes of finding the new pathways that could help regain blood glucose control after the onset of diabetes.

Identifying new pathways that are active when beta cells divide, may provide new insights into possible drug targets. The research team also explained the molecular features and metabolic activity of the beta cells to determine how the dividing beta cells may differ from the non-dividing cells.

"This in-depth characterization of individual beta cells in different proliferative states was enabled by newer technology. It provides a better picture of what sends beta cells into cell division and clues we can use to try to develop drugs to stimulate certain pathways."

New Insights on Molecular Structure of Antibiotics to Tackle Antimicrobial Resistance
The molecular structures of different versions of teixobactin were explored to develop drugs for tackling antimicrobial resistance, reveals study.

Find a Hospital Iron Intake Calculator Calculate Ideal Weight for Infants Diaphragmatic Hernia Find a Doctor Pregnancy Confirmation Calculator The Essence of Yoga Daily Calorie Requirements Vent Forte (Theophylline) Blood - Sugar Chart
This site uses cookies to deliver our services. By using our site, you acknowledge that you have read and understand our Cookie Policy, Privacy Policy, and our Terms of Use