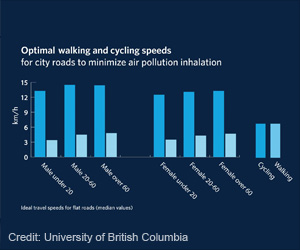 "The faster you move, the harder you breathe and the more pollution you could potentially inhale, but you also are exposed to traffic for a shorter period of time. This analysis shows where the sweet spot is," said Alex Bigazzi, a UBC transportation expert in the department of civil engineering and school of community and regional planning who conducted this analysis.


‘Walking and cycling at optimal speed will reduce the exposure to traffic as well as offer the health benefits of exercise.’


For female cyclists under 20, the ideal speed linked to the least pollution risk is 12.5 kilometres per hour on average on a flat road.

For male cyclists in the same age group, it is 13.3 kilometres per hour.

Ideal travel speeds were at 13 and 15 kilometres per hour for female and male cyclists in the 20-60 age group.

Female and male pedestrians under 20 years old should be walking at speeds around 3 kilometres per hour, while their older counterparts should look at reaching at least 4 kilometres per hour, to breathe in the least amount of pollution over a trip. Bigazzi also computed these ideal travel speeds for other road grades.

"If you move at much faster speeds than the MDS--say, cycling around 10 kilometres faster than the optimal range--your inhalation of air pollution is significantly higher," said Bigazzi. "The good news is, the MDS numbers align pretty closely with how fast most people actually travel."

The findings, which build on Bigazzi's recent research on the high amounts of toxic chemicals absorbed by cyclists on busy city streets, are described in a paper published recently in the International Journal of Sustainable Transportation.

Health Researchers: Walking or Bicycling to Work can Motivate Colleagues to Follow Suit
Health researchers suggest that people who walk or bike to work are likely to influence their co-workers and partners to do the same.
READ MORE

Many Brits Not Walking Enough, Poll Finds
More than a quarter of Britons walk for less than an hour every week, a new poll conducted by a walking charity organization reveals.
READ MORE

Walking for 2 Minutes will Improve Your Longevity
Taking a break for just two minutes and doing some light-intensity activities such as walking lowers risk of premature death by 33%.
READ MORE

Exercise and FitnessBody Types and Befitting WorkoutsWalking for Fitness and Weight LossExercises to Grow TallerWalking As An ExercisePollutionAir PollutionHealth Benefits of Cycling For WomenWho Else Wants to Know How Walking Helps Heart and Brain?Exercise bikes or Elliptical trainers: Which is Better?
Sign up for Wellness Consult a Doctor Sign up for Selfcare