Written by Madhumathi Palaniappan
Medically Reviewed by The Medindia Medical Review Team on December 21, 2016 at 5:02 PM 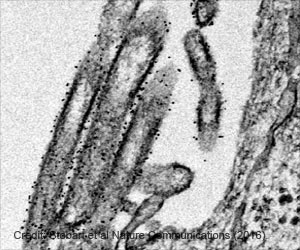 A new version of respiratory syncytial virus (RSV) that is highly attenuated and is potent in producing protective antibodies was engineered to develop a new vaccine for RSV infections, finds a study from Emory University School of Medicine and Children's Healthcare of Atlanta.

The study findings were detailed in the journal Nature Communications.

Martin Moore, Ph.D, associate professor of pediatrics at Emory University School of Medicine and Children's Healthcare of Atlanta Research Scholar said, "Our paper shows that it's possible to attenuate RSV without losing any immunogenicity."


"This is a promising live-attenuated vaccine candidate that merits further investigation clinically."

He also added that the next step of creating the vaccine requires clinical trials to study the safety and immunogenicity of the vaccine.

Vaccination During Pregnancy Prevents Flu in Infants
Infants six months and younger whose mothers were vaccinated when pregnant had a 70 percent reduction in laboratory-confirmed flu cases.
Advertisement
Respiratory Syncytial virus (RSV) is a common respiratory virus that causes respiratory tract infections like bronchiolitis, pneumonia. It is the number one cause of pneumonia death in children and one of the most important causes of infant hospitalization in the United States.

Previous attempts to develop respiratory syncytial virus in 1960 have backfired, and has worsened RSV infections in infants. Even, a recent clinical trial of protein-only RSV vaccines has shown disappointing results.

Some vaccines against another virus like polio, mumps and measles were created by weakening the virus in cell culture. The strain was considered to be safe for developing the vaccine but was also found to stimulate the immune system.

Moore said, "Achieving that balance is a challenge, "Weakening RSV by passage hasn't worked out satisfactorily. It turns out that for RSV, the natural virus does not induce a lot of immunity itself."

Moore and his team engineered Respiratory syncytial virus to increase the production of a protein called Fusion (F). It is critical for specific virus and is the target for developing several vaccines. Mutations in the gene may encode for the fusion protein. The research team also made the virus more stable to heat, that could help in manufacturing and developing vaccines.

The research team has also removed or weakened other viral genes that promote infections and suppress the immune system. The modified virus is called OE4 stimulated high levels of producing antibodies.

The research team also used the procedure of codon-deoptimization to rewrite the viral genes. This procedure makes it less likely for the virus to change back to its original form.

While examining through the electron microscope, OE4 virions were found to be similar to the standard RSV virions. OE4 proteins had higher levels of immunogenic form of F protein and lower levels of another protein G.

OE4 vaccines can completely protect mice against later infections caused by RSV virus. In contrast, when compared to the chemically inactivated RSV vaccine OE4 did not enhance lung disease in cotton rats. The animal studies were conducted at Baylor College of Medicine and Sigmovir Systems.

Find a Hospital Diaphragmatic Hernia Drug Interaction Checker Accident and Trauma Care Loram (2 mg) (Lorazepam) Blood - Sugar Chart The Essence of Yoga Color Blindness Calculator Calculate Ideal Weight for Infants Indian Medical Journals
This site uses cookies to deliver our services. By using our site, you acknowledge that you have read and understand our Cookie Policy, Privacy Policy, and our Terms of Use