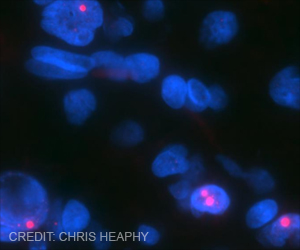 This might offer clues to the behavior of the tumors and offer potential new targets for therapy.


‘A thorough understanding of the fine genetic differences between cancers and healthy tissues will help in developing reliable prognostic strategies and better therapeutic agents.’


The first study was published online on September 20th in Acta Neuropathologica. The study was led by Fausto J. Rodriguez, M.D., associate professor of pathology at the Johns Hopkins University School of Medicine and member of the Johns Hopkins Kimmel Cancer Center.

A protein known as ATRX was identified in human brain tumors that arise as part of a genetically inherited condition known as neurofibromatosis type 1 (NF1).

NF1 initially causes benign tumors on nerves which later develops into brain cancer. Most NF1-related malignancies are non-aggressive. But a fraction are "high-grade" and difficult to treat.

The aim of the study was to find out what makes the more aggressive NF1-related tumors genetically different from low grade tumors and normal, healthy cells.

Tumors that affect the nervous system usually have mutations in the ATRX gene. These mutations lead to the production of proteins that maintains the length of telomeres. By maintaining the length of the telomeres, ATRX mutations give cells the ability to endlessly divide which is the hallmark of cancer.

Telomeres are repetitive segments of DNA on the ends of chromosome. In normal cells, their length shorten each time a cell divides. Telomere shortening prevents the excess cell division.

The role of ATRX mutations in NF1 related brain cancers were studied using samples of high-grade and low-grade gliomas from 27 patients suffering from NF1.

Researchers tested the samples for longer telomeres that were not the product of telomerase. This nontelomerase-associated telomere lengthening is known as alternative lengthening of telomeres or ALT. They also tested for loss of the protein product of ATRX caused by mutations in this gene.

About a third of the 27 samples had ALT and loss of the ATRX protein.

By confirming the role of the mutation through further research, new anti-cancer agents that target cells with ATRX mutations or ALT to limit telomere length, can be developed.

The second study was published online on October 14th in Modern Pathology.

According to Fausto J. Rodriguez, unlike many other types of cancerous tumors, low-grade pediatric gliomas appear to have few genetic mutations, leaving the biology of these cancers a mystery.

Researchers studied how the cancer cells regulated the expression of genes or whether they make their constituent proteins.

One way to control expression is through microRNA. These are small pieces of noncoding genetic material that control whether a gene's protein is generated from the DNA blueprints inside cell nuclei.

When researchers analyzed 800 different microRNAs in nine different types of low-grade gliomas or related cancers, a microRNA called miR-487b, which was consistently underexpressed in tumor tissue compared to healthy cells, was identified.

Eventually, physicians might be able to look at the levels of miR-487b and other microRNAs in blood or cerebrospinal fluid to test for the presence of cancer.

A thorough understanding of the fine genetic differences between cancers and healthy tissues will help in developing reliable prognostic strategies and better therapeutic agents.

Anticancer Drug Restores Hearing in People With Neurofibromatosis
One in 25,000 people is born with neurofibromatosis type 2, a hereditary tumor syndrome in which virtually everyone progresses to deafness because of vestibular schwannomas.
READ MORE