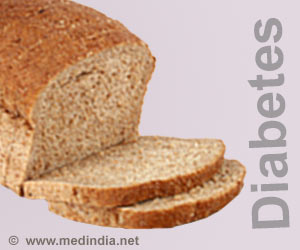 Steamed bread made from a new purple grain wheat variety developed by Chinese scientists may help lower blood sugar, according to a study published in the Nutrition Journal.

Diabetes is undoubtedly one of the most challenging health problems in the 21st century. According to the International Diabetes Federation, 366 million people globally have diabetes with China leading the table with 90 million diabetics and closely followed by India with 61.3 million diabetics.

Since diabetes is highly correlated with the life style and diet, it can be prevented by controlling the plasma glucose levels, that is, blood sugar. Multiple studies show that consumption of low glycemic index (GI) foods could have a significant impact on the preventing and controlling diabetes.


A slice (28g) of whole wheat bread contains 69 calories and although it is one of the most consumed food staples globally and is a 'moderately allowed' food in diabetic menu plan, this cereal comes with a glycemic index of 71 which is relatively high.

In Northern China, steamed bread is a popular daily food but with GI value of 88.1-98.3, the glycemic response of steamed wheat bread is even higher than the whole wheat bread.

Organic chromium is one of the essential micro-elements for human body that plays a very important role in maintaining and regulating proper levels of carbohydrate and lipid metabolism. It also helps decrease requirement for insulin and helps lower plasma cholesterol levels. Inorganic chromium does not show these functions so chromium has to be converted to organic form to get its benefits.

The results showed that -

- In healthy subjects, consumption of Jizi439 steamed wheat bread resulted in the least increase in plasma glucose and the GI was significantly lower than the other two varieties.

- In diabetic subjects, the average of postprandial 2h plasma glucose increment of Jizi439 was 2.46mmol/L which was significantly lower than that of the mixture of white wheat but was not significantly different from buckwheat.

There is sufficient evidence that buckwheat effectively reduces diabetes symptoms. Earlier studies have shown that a single dose of buckwheat seed extract lowered plasma glucose levels by 12 to 19 percent within 90 minutes and 120 minutes after administration in laboratory animals. 'In present study, postprandial 2h plasma glucose level of Jizi439 was lower than that of buckwheat. Therefore, Jizi439 should be also beneficial to diabetes,' co-relate the researchers.

The researchers thus concluded that steam bread made from Jizi439 wheat variety would be an ideal food for preventing and treatment of diabetes.