How Much Vitamin D is Needed for Infants? 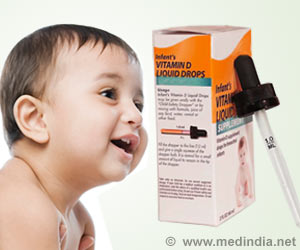 We all know very well that vitamin D or 'the sunshine vitamin' is required for the growth and development of healthy bones. In the initial years of a baby's life, the bones grow at a fast pace. Hence, vitamin D is very important for the growing toddlers especially during the first twelve months of their lives.

Some pediatricians often recommend vitamin D supplements to be given to babies. Now, here arises an important question-how much vitamin D should be given to the baby? Prof. Hope Weiler from the School of Dietetics and Human Nutrition at McGill University along with Dr. Celia Rodd of McGill's Department of Pediatrics conducted a study to evaluate the actual amount of vitamin D needed for proper development of bones in young babies.

The researchers advocated that a daily dose of about 400IU of vitamin D should be given to the infants for maintaining proper growth and development. Prof. Weiler said, "There's sometimes a feeling that more is better." He added, "But until now, no one had compared the popularly recommended daily doses of vitamin D to see what will result in optimal health for infants, so we were very glad to be able to do this."


However, at present the daily vitamin D requirement differs from place to place. In Finland and France, about 1,000IU of vitamin D is advised for the infants. Both the World Health Organization and Health Canada have recommended a daily dose of vitamin D of 400IU for healthy infants.

The research of the Canadian scientists was recently published in the special child health issue of the Journal of the American Medical Association. The scientists observed that a dose of 400IU is good enough as compared to a dose of 800IU, 1,200IU or 1,600IU of vitamin D in keeping at bay rickets and osteomalacia and at the same time strengthening bones in infants.

Prof. Weiler, the co-principal researcher said, "Right now the dose that we're recommending is the 400 and that's to be given every day until the baby can achieve that amount from other foods, and typically we consider that more at one year of age." Vitamin D is called the sunshine vitamin because most of us can synthesize this crucial vitamin with the help of sunlight.

The experts enrolled about 132 infants at Montreal who were haphazardly given one of the four doses of vitamin D-400, 800, 1,200 or 1,600 IUs for 12 months. Most of the babies were breastfed; however, the proportion lowered when babies were one year old.

The babies' weight, length, head circumference, and the level of vitamin D in their blood sample were recorded at three months, six months, nine months and at twelve months. The scientists also analyzed how much mineral was incorporated in the bones of the infants during the process of their growth. At three months of administration of vitamin D, it was noticed that a dose of 400IU was sufficient enough for adequate bone growth.

Dr. Rodd mentioned, "The parents that we saw in the study were highly motivated and made sure that their babies were taking the vitamin D on a daily basis." The researchers finally concluded that high doses of vitamin D give no extra advantage in strengthening babies' bones and in providing a healthy skeletal foundation.

The scientists said, "We know very well if you don't have enough vitamin D that you can develop rickets as a young infant and a child." Dr. Steven Abrams of the Baylor College of Medicine in Houston mentioned that further research is required to get more reliable "important dose-response information." The role of higher doses of vitamin D on the bones of the infants is yet to be clarified.

Vitamin D Deficiency Dangerous for Infants and Nursing Mothers
Vitamin D, which is known to play an important role in promoting bone health, is now being seen as having a critical function in maintaining the immune system throughout life, according
READ MORE

Obese Mums to be Blamed for Kids' Vitamin D Deficiency
Researchers say that women who are obese at the start of their pregnancy put their babies at risk of having insufficient levels of vitamin D.
READ MORE