HIV Infection can be Suppressed by Anti-inflammatory Drugs

Jak inhibitors, a class of anti-inflammatory drugs, can suppress the reservoir of infected immune cells in people infected with HIV infection. The findings of this study are further discussed in the journal PLOS Pathogens.


"One of the major impediments to an HIV cure is the reservoir," said the study's senior author Rafick-Pierre Sékaly, PhD, the Richard J. Fasenmyer Professor of Immunopathogenesis, co-director of the Center for AIDS Research Proteomics and Systems Biology Core, and professor of pathology at Case Western Reserve University School of Medicine.


‘Anti-inflammatory medications such as tofacitinib and ruxolitinib can block viral production from infected HIV cells, prevent their transmission to bystander cells, and decay the viral reservoir.’


"These are a very small number of immune cells that have the virus integrated into their genomes. These cells are completely undetectable by the immune system because the virus is dormant. But as soon as you stop treatment, the virus reactivates. Our results show you can kill these reservoir cells if you treat them with Jak inhibitors."

The new study included 37 people infected with HIV, but who have controlled the virus with antiretroviral drugs. The size of their residual reservoir - the number of cells with HIV integrated into their DNA - was linked to the activity of Jak enzymes in the cells. The research suggests blocking Jak enzymes could, in effect, impose a drought on the HIV reservoir. Laboratory experiments confirmed that Jak inhibitors prevent HIV spread to nearby, healthy cells.

Sékaly's foundational research into HIV reservoir persistence made him a natural collaborator for researchers at Emory with expertise in small molecule Jak inhibitors. Co-corresponding author on the study is Raymond F. Schinazi, Ph.D., DSc, a Frances Winship Walters Professor of Pediatrics and Director of the Laboratory of Biochemical Pharmacology at Emory University. Schinazi is also the director of the HIV Cure Scientific Working Group at the Emory University Center for AIDS Research. One of the study's three first authors, Christina Gavegnano, Ph.D. is an Assistant Professor in Dr. Schinazi's group. Schinazi and Gavegnano previously reported that Jak inhibitors demonstrate antiviral potency in human immune cells and that ruxolitinib can ameliorate HIV-associated encephalitis in a mouse model.

The researchers hope their collaborative study could result in a newly approved indication for Jak inhibitors to treat HIV infected individuals. Said Schinazi, "Our results strongly suggest that monitoring and suppressing inflammation with Jak inhibitors will impact HIV reservoirs not only systemically, but also in the central nervous system where the virus hides."

A key safety feature of Jak inhibitors in the study is that they are not globally immunosuppressive, but instead immunomodulatory. Said Sékaly, "Our results show how Jak inhibitors do not prevent the reservoir cells from responding to new infections."

The PLOS Pathogens paper showed Jak inhibitors do not block functional immune responses to HIV, or normal immune cell function. These findings are mirrored by data collected in humans where global immunosuppression is not reported with Jak inhibitors. This mechanism of action is unique due to the drugs' apparent specificity for HIV-infected cells, unlike global immunosuppressive agents used in transplants, which blunt all activation and result in reduced functional immunity.

Since Jak is overactive in HIV-infected cells, Jak inhibitors can specifically target inflammatory cytokines in the cells that cause them to activate and "reseed" nearby cells. HIV requires cellular activation to replicate efficiently. Blocking key inflammatory cytokines in HIV-infected cells with a Jak inhibitor creates an environment where the virus simply cannot replicate because it cannot properly activate the cell. The unique mechanism of action allows Jak inhibitors to block viral replication in infected cells, reduce the lifespan of reservoir cells (key markers such as Bcl-2 are down-regulated), and block expansion of the viral reservoir.

Explained Gavegnano, "Jak inhibitors are unique since they are highly selective agents that keep the lid on smoldering infection through anti-inflammatory properties. If the lid is on the smoldering fire long enough, it is our hope that the fire will be extinguished."

The study results have strengthened rationale for an ongoing, AIDS Clinical Trial Group (ACTG) Phase 2a multi-site trial to evaluate the safety, tolerability, and efficacy of ruxolitinib in HIV-infected individuals. "We are rigorously evaluating the effect of Jak inhibitors on key events that prevent the eradication of HIV in culture, animal models, and humans," said Gavegnano.

"We are also carefully monitoring safety.It is important to evaluate these agents from every possible angle, to ensure that we are delivering a safe and effective treatment. Our data to date provides a reason to explore the indication of HIV for Jak inhibitors carefully. We look forward to understanding how blocking residual inflammation in HIV-infected cells can impact the ultimate goal of a cure." continued Ms.Gavegnano.

Teens Exposed to Drug Use at Risk for HIV Later in Life
Increasing frequency of psychosocial risk factors experienced during adolescence may have effects on HIV risk behaviors decades later.
READ MORE 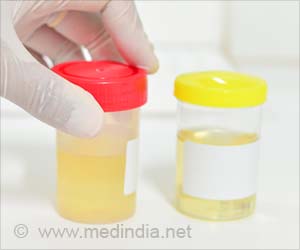 Urine Test To Detect Active Tuberculosis in HIV-negative Patients
Patients with active pulmonary tuberculosis infection, but, without HIV infection can be now be tested accurately for tuberculosis by a urine test.
READ MORE

Oral Health And AIDSDrug ToxicityAIDS/HIVAIDS/HIV - EpidemiologyAIDS/HIV - Clinical FeaturesAIDS/HIV - Health EducationAIDS/HIV - Prevention And TransmissionAIDS / HIV - TreatmentAIDS/HIV- Lab Tests and FaqsProstitution: Fresh Stakes in the Oldest Trade
Sign up for Wellness Consult a Doctor Sign up for Selfcare Sign up for Covid