Written by Julia Samuel
Medically Reviewed by The Medindia Medical Review Team on February 6, 2017 at 12:57 PM 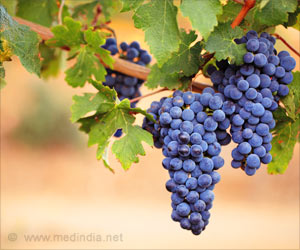 Health Benefits of Grapes
Grapes are among the most popular of fruits not just because of their natural sweetness but also for its nutritional value. Grapes rich in vitamins C and K help prevent chronic diseases, and protect against certain types of cancer. Here's why you should consume grapes.
Advertisement
‘Consuming grapes for six months preserved healthy metabolic activity in the regions of the brain that are affected by the earliest stages of Alzheimer's disease, where metabolic decline takes hold.’

Additionally, those consuming a grape-enriched diet also exhibited increased metabolism in other areas of the brain that correlated with individual improvements in attention and working memory performance, compared to those on the non-grape diet.


"The study examines the impact of grapes as a whole fruit versus isolated compounds and the results suggest that regular intake of grapes may provide a protective effect against early decline associated with Alzheimer's disease," said Dr. Daniel H. Silverman, lead investigator of the study.

"This pilot study contributes to the growing evidence that supports a beneficial role for grapes in neurologic and cardiovascular health, however more clinical studies with larger groups of subjects are needed to confirm the effects observed here."

In the study, subjects with early memory decline were randomly selected to receive either whole grape powder - equivalent to just 2 ¼ cups of grapes per day - or a polyphenol-free placebo powder matched for flavor and appearance.

The results showed that consuming grapes preserved healthy metabolic activity in the regions of the brain that are affected by the earliest stages of Alzheimer's disease, where metabolic decline takes hold.

Rare Disease Could Help Find Cure for Nervous-Neurologic Disorders
Single strand breaks are one of the most common types of DNA damage and could help spot other rare DNA repair related diseases.