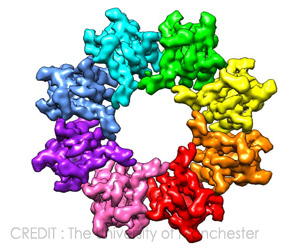 Two gene mutations that trigger a retinal disease that causes blindness among one in 5,000 males have been mapped, leading to the potential for new therapeutic treatments.

Researchers from The University of Manchester undertook a structural analysis of X-linked Retinoschisis (XLRS).

Age Related Macular Degeneration
AGE RELATED MACULAR DEGENERATION (AMD) is a disease associated with ageing. It is a degenerative condition that affects the macula and causes gradual loss of central vision.
Advertisement
‘The identification of mutations could lead to genetic interventions and treatments, which could limit or prevent the damage caused by XLRS.’

XLRS is a genetic disease leading to a type of macular degeneration in which the inner layers of the retina split causing severe loss of vision and gradual blindness.


Currently, there is no effective treatment for XLRS, with research focused on understanding how the disease occurs in the retina.

XLRS is caused by mutations in the retinal protein retinoschisin.

Gene Transfer to Neovascular Age-Related Treat Macular Degeneration
The spectacular success of gene therapy for genetic retinal disorders might translate into a platform for treating more common diseases of the eye.
Advertisement
The protein plays a crucial role in the cellular organization of the retina. The protein assembles itself to form paired octameric (consisting of eight retinoschisin) rings. The rings each resemble an 8-bladed propeller.

This new structural insight yielded important clues into how retinoschisin performs its crucial role in the retina and spurred efforts to investigate what happens to this structure when it is mutated in XLRS.

Using a cryo-electron microscope, the team examined the paired rings as well as the effects on the rings of two XLRS-causing mutations.

Clair Baldock, Professor of Biochemistry at The University of Manchester and lead author of the research team's resulting paper, said the cryo-electron microscopy allowed them to identify the location of the mutations on the rings.

Researchers found that one disease-causing mutation sits in the interface between the octamer rings, causing retinoschisin to be less stable. The other mutation is on the propeller tip which could be a novel interaction site for other binding proteins in the retina.

As well as identifying the mutations and precisely mapping their locations, the research team held out the possibility that future work could lead to genetic interventions and treatments, which could limit or prevent the damage caused by XLRS.

"XLRS is a promising candidate for gene therapy, so our findings on these two different classes of mutations will be informative for future therapeutic strategies," concluded Professor Baldock.

Usher Syndrome
News Archive
News Resource
Advertisement
News Category
Milestone In Voluntary Blood Donation Achieved Samsung Reinvents Toilet for the Poor Which is a Better Form of Exercise: Daily or Weekly? First Phase of Foot-and-Mouth Disease Vaccination Shocking News: Polio Cases Return After a Decade in the US
More News
Sign up for Wellness Consult a Doctor Sign up for Selfcare

How to Reduce School Bag Weight - Simple Tips Noscaphene (Noscapine) The Essence of Yoga Iron Intake Calculator Find a Hospital Blood Pressure Calculator Drug - Food Interactions Turmeric Powder - Health Benefits, Uses & Side Effects Pregnancy Confirmation Calculator Post-Nasal Drip
This site uses cookies to deliver our services. By using our site, you acknowledge that you have read and understand our Cookie Policy, Privacy Policy, and our Terms of Use