Written by Shirley Johanna
Medically Reviewed by The Medindia Medical Review Team on December 19, 2016 at 11:46 PM 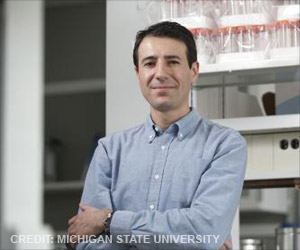 Chinese herbal medicine to treat malaria can also help treat tuberculosis (TB) and slow down the process of drug resistance.

The study led by a TB expert, Robert Abramovitch, microbiologist at the Michigan State University, found that the ancient remedy artemisinin stopped the ability of TB-causing bacteria, known as Mycobacterium tuberculosis, to become dormant. The dormant stage of the TB-causing bacteria often makes the use of antibiotics ineffective.

Low-Cost Handheld Device may Spot Tuberculosis in 20 Minutes
A Britain-based technology company has claimed to have developed a smartphone-sized handheld DNA analyser that may diagnose tuberculosis in flat 15-20 minutes.
Advertisement
‘Ancient Chinese remedy for malaria was found to inactivate Mycobacterium tuberculosis and also prevent the evolution of multiple drug resistance.’

Effect of Artemisinin on Tuberculosis-Causing Bacteria
Mycobacterium tuberculosis needs oxygen to thrive in the body. The immune system starves this bacterium of oxygen to attack the infection. The research team found that artemisinin attacks a molecule called heme, which is found in the bacteria oxygen sensor.


Artemisinin turns off the oxygen sensor and stopped the disease's ability to sense how much oxygen it was getting.

"When TB bacteria are dormant, they become highly tolerant to antibiotics. Blocking dormancy makes the TB bacteria more sensitive to these drugs and could shorten treatment times," said Abramovitch, an assistant professor in the College of Veterinary Medicine.

Insights into the Genetic Make-Up of Tuberculosis Bacteria
Lineage 4 can be genetically further subdivided into several sublineages, revealed a new study.
Advertisement
"When the Mtb is starved of oxygen, it goes into a dormant state, which protects it from the stress of low-oxygen environments. If Mtb can't sense low oxygen, then it can't become dormant and will die," said Abramovitch.

Dormant TB can remain inactive in the body for decades. But a weaker immune system can activate the bacteria and spread the infections. Whether the bacteria is inactive or active, TB can take up to six months to treat, which is one of the main reasons the disease is difficult to control.

"Patients often don't stick to the treatment regimen because of the length of time it takes to cure the disease," he said. "Incomplete therapy plays an important role in the evolution and spread of multi-drug resistant TB strains."

The research could help shorten the course of therapy because it can clear the hard-to-kill bacteria, leading to improved patient outcomes and also slow down the evolution of drug-resistant TB.

The researchers screened 540,000 different compounds and found five other possible chemical inhibitors that target oxygen sensor of the bacteria in various ways and could be effective in treatment as well.

The study is published in the journal Nature Chemical Biology.

Tuberculosis
Tuberculosis is a global problem that affects two billion people. New tools are required to reduce the prevalence, and prevent drug resistance. The current research could pave a new way to kill the bacteria.

Advertisement
<< First Study To Point Out Brain Volume Changes After Pregnanc...
Regular Use of NSAIDs May Increase the Risk of Cancer-Relate... >>

Tuberculosis
News Archive
News Resource
Advertisement
News Category
Milestone In Voluntary Blood Donation Achieved Samsung Reinvents Toilet for the Poor Which is a Better Form of Exercise: Daily or Weekly? First Phase of Foot-and-Mouth Disease Vaccination Shocking News: Polio Cases Return After a Decade in the US
More News
Sign up for Wellness Consult a Doctor Sign up for Selfcare