World Malaria Day 2014: Fight Back Against Malaria, Protect Your Future 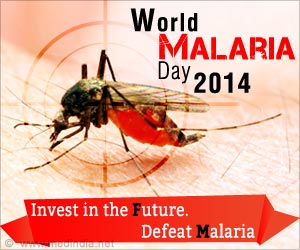 Through the three-year theme for the period of 2013-2015, WHO targets to meet the 2015 Millennium Development Goals and fight back malaria with an eye on making the world malaria free.

With the aim of spreading awareness, education and understanding about malaria and looking for means to prevent and control it, the WHO started World Malaria Day in 2007.

Malaria occurs mostly in poor, tropical and subtropical areas of the world. The Democratic Nigeria, Republic of Congo and India are the worst affected countries. According to WHO Director-General Margaret Chan, the fact that so many people are infected and dying from mosquito bites is one of the greatest tragedies of the 21st century.

Dr Valecha says, "Globally, malaria is a major problem in African continent with Plasmodium falciparum as the predominant species and very efficient malaria vectors. The disease burden, including death, is mainly in children under 5 years of age in sub-Saharan Africa."

The local weather conditions in Africa are such that transmission of the disease takes place the entire year. Lack of proper resources and unstable socio-economic condition prevent efficient malaria control activities.

WHO Statistics on Malaria

As per the WHO, every year, over 200 million malaria cases are seen globally, but most of the cases are never tested or registered. In 2012, there were approximately 207 million cases of malaria and 6,27,000 malaria deaths.

In 2012, malaria killed an estimated 1,300 children everyday, or one child almost every minute.

The governments of the world are working on eliminating the menace of malaria as it costs a lot to human lives and resources. Approximately US$ 5.1 billion is needed every year to fight back the disease. In 2012, total international and domestic funding for malaria was US$ 2.5 billion.

A Lancet report says that funds hindered the work of providing insecticide-treated bednets in sub-Saharan Africa, where 150 million nets are needed annually to protect people from the malaria parasite. But only 70 million were delivered in 2012. However, the situation improved in 2013.

Since 2000, there has been a 42 per cent decline in global malaria mortality rates. But still a lot needs to be done.

Condition of Malaria in India

Unicef says that in India, of the 1.2 billion people, 80.5 per cent reside in malaria-prone areas. According to Dr Valecha, "In India, 22 per cent population lives in areas with high transmission and approximately 30 per cent of disease burden is reported from children."

With such huge figures, India has a big task before it - to get free of malaria by 2015. Malaria is the deadliest of all vector-borne diseases. About 10 per cent of the total cases of malaria are reported from urban areas. Maximum numbers of malaria cases are reported from places like Chennai, Vishakhapatnam, Vadodara, Kolkata, New Mumbai, and Vijayawada.

Today, malaria in urban areas is a big problem due to unplanned expansion of cities and towns. A surge in construction in cities has led to migration of workers to cities, causing problems in sanitation and water storage in slums. All these lead to spread of mosquitoes which transmit malaria.

The WHO put malaria deaths in 2006 at 21,000, but a nationwide mortality survey in India pointed out that these figures were too low and were underestimated.

The Government is also taking steps to provide mosquito nets, medicines, etc. to people in order to stop malaria from spreading. It is also spraying DDT to kill the deadly mosquitoes.

She further added that all these have been made available at the level of community health workers who are given incentives for diagnosis and providing complete treatment.

But a setback for India is the growing resistance to the antimalarial drug chloroquine. Although the problem is seen in the entire country, it is more evident in regions with intense P. falciparum transmission such as North Eastern states, Odisha, construction sites, big metropolitan areas and areas along international borders.

Symptoms of malaria may appear in cycles. But initially, the symptoms are sometimes similar to those of many other infections caused by bacteria, viruses or parasites. The person may have fever, chills, headache, sweats, fatigue, nausea and vomiting, enlarged spleen, and muscle pain. In rare cases, malaria can even affect functioning of brain or spinal cord, causing seizures or loss of consciousness.

Infection with the P. falciparum parasite is more serious and may become life-threatening. If not diagnosed on time, P. falciparum can be deadly as it is becoming chloroquine-resistance, said experts.

Children and pregnant women form the high-risk category and they should be very careful and watchful.

The best way to protect yourself from malaria is to keep away from mosquito bites by being vigilant and following certain guidelines.

A person should stay inside when it is dark outside and wear protective clothes, such as long pants and long-sleeved shirts.

One should use flying-insect spray indoors around sleeping areas. One should also take certain anti-malarial medicines when travelling to regions affected by malaria.

Malaria is caused by parasite called Plasmodium, which is transmitted through bites of infected mosquitoes. In the human body, the parasites grow in liver and then infect red blood cells. Malaria is transmitted by an infected female Anopheles mosquito.

According to Dr Valecha, people need to work to get rid of malaria. She says that patients should report to community health workers or health facility for proper diagnosis of fever, in urban areas, patients should insist on diagnosis of fever and not accept treatment empirically, doctors should give complete treatment after diagnosis as per national guidelines and over-the-counter sale of anti-malarials without prescription should be discouraged.

Vaccination for malaria can play an important role in our war against the deadly disease. Though different quarters are working on the issue, it will take some time before it is commercially available.