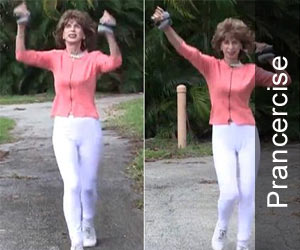 Joanna Rohrback, the founder of 'Prancercise,' seems to have the stars in her favor right now. Her video, depicting the unique exercise, which was released last year in December, seems to have gone viral in just a week, with a total of two million views and still counting.

Prancercise's official website describes the exercise as a springy, rhythmic way of moving forward, similar to a horse's gait and ideally induced by elation. The video, which garnered many hits and drew enthusiastic responses on YouTube, has Joanna Rohrback, dressed in pink and white, and imitating the galloping and trotting moves of horses, catching everyone's attention.

And it's not just a video, Rohrback has also penned down a book, Prancercise: The Art of Physical and Spiritual Excellence, which details the exercise, and several diet plans paired along with it.


Developed in the late 1980s, Prancercise seems to have made a thunderous re-entry into the world of healthy living. The exercise video, which includes a 'Prancercise trot' which involves alternating arm movements, a 'Prancercise gallop' involving a springy jaunt with a wider swing of arms and a 'Prancercise box,' which involves ankle weights to be moved to the arms, used for punching the air, has the founder demonstrating the moves herself.

To add to that, Prancercise seems to combine an aspect of mind-body medicine to the exercise too. According to the website, Prancercise uses imagery to imagine ourselves as a horse - a symbol of beauty, strength and endurance, shooing away all kinds of negative self images that one may have, during exercising. This combination of a spiritual activity with a light aerobic exercise may be hard to find, which is why, a lot of people actually want to give it a try. Judging by the enthusiastic comments following the YouTube video of Prancercise that took the Web by storm, people tied to their desks for long work hours are ready to jump out of their cubicles and prance around the office room to beat the monotony of work and energize their mind and body.

How well does Prancercise work for you? Well, you'll have to find that out for yourself.