Tonsils and Adenoids Cause Sleep Problems in Kids

A recent study found that surgical removal of tonsils and adenoids did not improve kids' memory or attention; however, their sleep, quality of life and behavior did positively change. 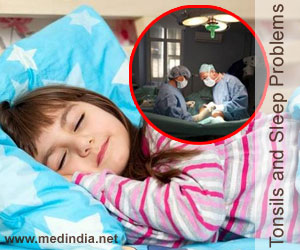 Tonsils and Adenoids Cause Sleep Problems in Kids

Swollen adenoids and tonsils are an important cause of sleep disturbances among children including sleep apnea. Sleep apnea is characterized by abnormal pauses in breathing during sleep. Sufficient sleep is essential for proper functioning and behavior during the daytime. Previous studies have revealed that sleep apnea is related with ailments such as attention-deficit/hyperactivity disorder (ADHD). According to scientists, swollen adenoids and tonsils block the airway and interfere with the process of breathing.

Dr. Susan Redline, Professor of Sleep Medicine at Harvard Medical School said, "There was a greater improvement in sleep with the surgery, and those improvements were likely responsible for the improvement in daytime functioning, energy levels and behavior."

The researchers enrolled 464 children aged between 5 to 7 years, who were randomly assigned to have adenotonsillectomy or "watchful waiting with supportive care." Adenotonsillectomy is the surgical procedure to remove tonsils and adenoids.

The experts observed that nearly half of the enrolled children were overweight or obese.

In order to assess if their learning and memory abilities improved with surgery, the kids were examined via a test called the Developmental Neuropsychological Assessment.

The scientists did not notice any difference between children who were operated and those who were not in terms of memory and attention.

However, significant improvements were observed in the behavior, executive functioning, quality of life and sleepiness in children who were operated as compared to those children who were in the watchful waiting group.

The researchers asked the parents of the children participating in the study to rate how efficiently their wards performed in their tasks, planned, got along with other kids and whether they displayed any annoyance or mood swings or had any trouble sleeping.

The researchers further added that the final study results were confirmed by both teachers and parents.

Redline said, "There have been parents who are worried about their children snoring and sleep apnea, and have felt nervous that if they didn't rapidly do the surgery, they might be exposing their child to poor school performance."

She clarified that if a parent wishes to choose a more conventional approach of observant waiting, there is simply no need to worry as there is no threat of mental decline.

Redline said, "Children who are having behavior problems, are feeling sleepy, are waking up un-refreshed in the morning and dragging during the day are much more likely to get a benefit from early surgery."

The researchers published the report pertaining to the effects of sleep apnea on children in the New England Journal of Medicine. The report was also presented at the American Thoracic Society annual meeting in Philadelphia.

Dr. Sandeep Dave, an otolaryngologist at Miami Children's Hospital said, "This is another validation of adenotonsillectomy for the treatment of sleep apnea in children."

"I think the verdict is still out whether or not there are changes in attention-deficit [ADHD]."

Tonsillitis treatment is given based on whether it is caused by a virus or bacteria.

Kids with asthma who have their tonsils and adenoids removed may experience less asthma symptoms, say researchers.

A new study suggests radiofrequncy-tonsillotomy, a procedure that helps surgeons reduce the size of the tonsillar tissue rather than remove the tonsils entirely, to be an effective

Pharmacological Options for the Treatment of Obstructive Sleep Apnea

Obstructive sleep apnea is defined as a sleep disorder involving decrease in airflow in the presence of breathing effort. The treatment for OSA includes pharmacologic and non- pharmacologic modalities.

Sleep is a behavioral state of restricted physical activity. It is controlled by our internal biological clock.

In Tonsillitis the tonsils are inflamed and swollen and it usually occurs due to bacterial or viral infection.