There were several bacterial strains that were identical, both in the mother as well as in infants which were distinct when compared to the microbes found in other mothers or infants. This was strong evidence in support of vertical transmission.
Mother to Infant Transmission of Microbes Confirmed Using Newly Devised Technology


Apart from this evidence, the research team from Italy that conducted the study found that, Bifidobacterium and Bacteroids strains were found in the infant gut as well as the gut of mothers.

Important for a Healthy Microbiome

Assistant professor at the Centre for Integrative Biology, Dr. Nicola Segata who is the senior author of the study said that early exposure of infants to gut microbiome was vital for the acquisition and a healthy microbiome. The research team under Dr. Nicola devised methods that identified the vertical transmission of microorganisms from mothers to their infants, showing that mothers were sources of microbes which were vital for the development of healthy infant gut microbiome.

Studies that were conducted earlier showed that the species of microbes were the same in both the mothers as well as infants but as these studies were cultivation free, the exact strain of the microbes could not be ascertained. Dr. Adrian Tett who was the co-senior author of the study concluded that unless the microbes were found to be the same strain or the same genetic variant, it would be difficult to ascertain if they were obtained through vertical transmission.

Infant Gut or the Womb?

The exact stage at which colonization of microbes occurs has been the topic of debate among scientists, whether it occurs in the infant's gut at the time of birth or if it occurs in the womb. Dr. Segata said that if it could be found that exposure to microbiome occurs at the time of delivery then if the mother harbors an infectious strain which could harm the baby, then preventive medicine could be prescribed to avoid transmission to the infant. Current medical practices advocate the use of tests to detect Streptococcus group B strains and preventive medication is administered to avoid the transmission to the new born infant.

The 24 samples that consisted of 8 breast milk, 8 mother fecal and 8 infant fecal samples were analyzed using shotgun metagenomics sequencing. An additional tool called metatranscriptomics was also utilized to identify which microbes were present in two of the pairs of the fecal samples.

The study found that

The metagenomic samples were further analyzed to understand the strains of bacteria that were present using computational techniques that were newly developed.  The results of this part of the study were:
Metatranscriptomics aided in identifying that the same strains of bacteria were found in both the mother and the child, providing strong evidence about vertical transmission.

There are further studies that are planned by the research team to understand the significance of mother to infant transmission and comparing this with vaginal and cesarean delivery, skin contact and breast feeding routes of transmission.

Advantages of the Microbiome in Humans

There are numerous microorganisms in the body and it is estimated that the genes present in these organisms are more than those in the human genome.  The metabolic activities that are carried out by the gut microflora have resulted in them being called a 'forgotten' organ.

Microorganisms aid in
The microbiome present in humans is very important, especially gut microbiome as they play an important role in digestion. It is therefore important to study the vertical transmission that occurs from the mother to child and to identify methods to ensure a healthy gut microbiome.

The current study that focuses on the presence of vertical transmission between mother and child will aid in understanding the benefits of a normal delivery and the healthy microbial environment which could be passed on.

Gut Microbiome Communicates With Host Cells to Switch Genes on and Off
The mircobiome serves as a mediator of host gene expression through the epigenome, the chemical information that regulates which genes in cells are active.
READ MORE 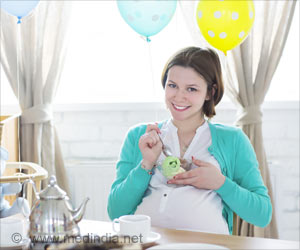 High-Fat Diet During Pregnancy may Affect Babys Gut Microbiome
Baby's gut microbiome could be influenced by mother's high-fat diet during pregnancy. The gut microbiome changes were present from birth to six weeks of age.
READ MORE