Written by Hannah Joy, M.Phil
Medically Reviewed by The Medindia Medical Review Team on May 7, 2020 at 6:30 PM

YouGov has teamed up with public health experts at the Institute of Global Health Innovation (IGHI) at Imperial College London to help health professionals across the world limit the impact of the disease. The ongoing survey runs in 29 countries and provides behavioral analysis on how different populations are responding to COVID-19. The anonymized respondent level data is freely available through Github.

Coronavirus
Coronaviruses infect animals, humans, and birds. Human coronaviruses, such as SARS, MERS, and 2019-nCoV cause respiratory distress and even death. The S protein is the infectious agent of the virus.
Advertisement
‘India is under strict lockdown and over 50,000 coronavirus cases are in the country. The entire nation has been cautiously quarantining themselves to stop the spread of COVID-19. As the world awaits an effective treatment, social distancing remains the most effective tool against the pandemic and heres how Indians are doing their bit.’

Melanie Leis, Director of IGHI's Big Data and Analytical Unit, said: "During this time of crisis, openness and transparency are critical to enable timely, evidence-based responses by governments and health systems. By sharing our data, and the insights we learn from them, we hope this work can play an important role in countries' ongoing strategies to mitigate the impact of this pandemic." With India under strict lockdown and over 30,000 active cases in the country, the entire nation has been cautiously quarantining themselves to stop the spread of COVID-19. As the world awaits an effective treatment, social distancing remains the most effective tool against the pandemic and here's how Indians are doing their bit.

An analysis across 10 markets between April 20th - 26th reveals a large majority of urban Indians (90%) are practicing social distancing (i.e. keeping six feet apart from other people) by avoiding crowded areas, either always or frequently. Some of the highest rates of respondents practicing social distancing in this manner are among people who live in Italy (97%), UK (94%) and Spain (94%), and the lowest rates are in markets such as Germany (75%), Sweden (79%) and China (84%). 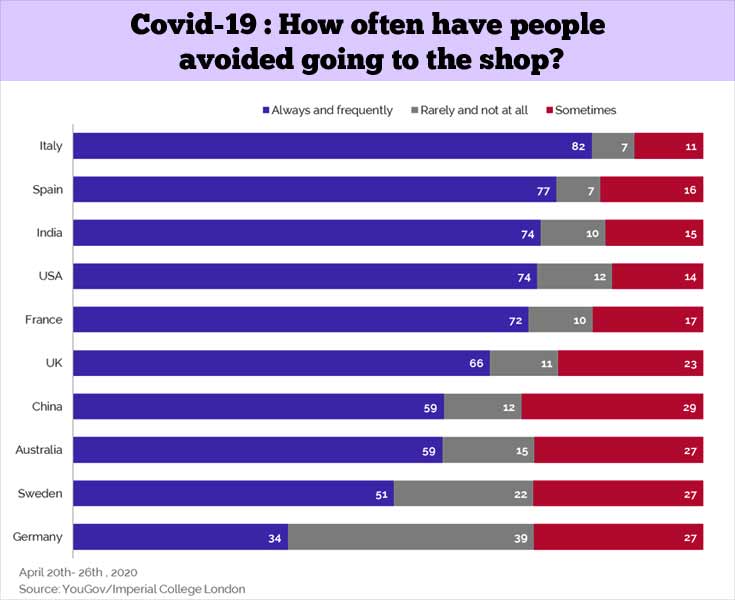 Exercising further caution, 87% of Indians admitted that in the past few weeks they have always or frequently avoided coming in contact with symptomatic people or people who they think might have been exposed to Covid-19, which again is slightly lower than people in Italy and Spain (where 94% and 91% said this) practising the same norm.


Despite the widespread panic about shortage of essential supplies, around three fourths (74%) of urban Indians claimed they always or frequently refrain from going to shops. Compared to Italy (82%) and Spain (77%) this number is low, but it is much higher when compared to other European countries such as Germany (34%) and Sweden (51%), as well as China and Australia (59% each). 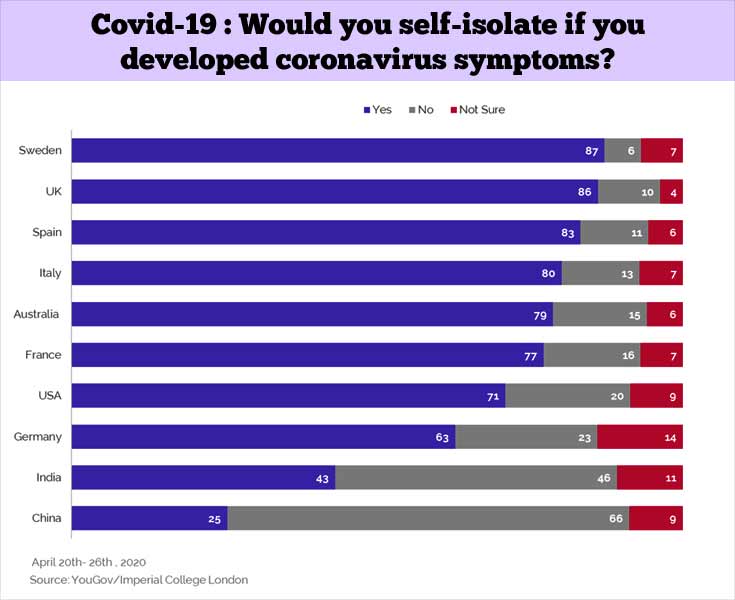 Maintaining Distance Even at Home

Not just outside home, people are taking precautionary measures even at home in order to maintain distance. The data shows that slightly more than half have always or frequently started eating separately at home (54%) and slept in different bedrooms (56%) which normally they wouldn't have done, as a preventative measure to avoid personally contracting the virus or spreading it to their loved ones.

Coronavirus Treatment and Risk to Breastfeeding Women: Study
With the ongoing concern about the coronavirus (COVID-19), which originated in Wuhan, China, and spreading globally, that causes severe acute respiratory syndrome coronavirus 2 (SARS-CoV-2), thoughts turn to treatment in general and of nursing mothers, in particular.
Advertisement
When it comes to avoiding social gatherings, more than eight in ten people (86%, who always or frequently do it) have managed to keep themselves away from small gatherings (of not more than 2 people) as well as large get-togethers (87%) of more than 10 people. 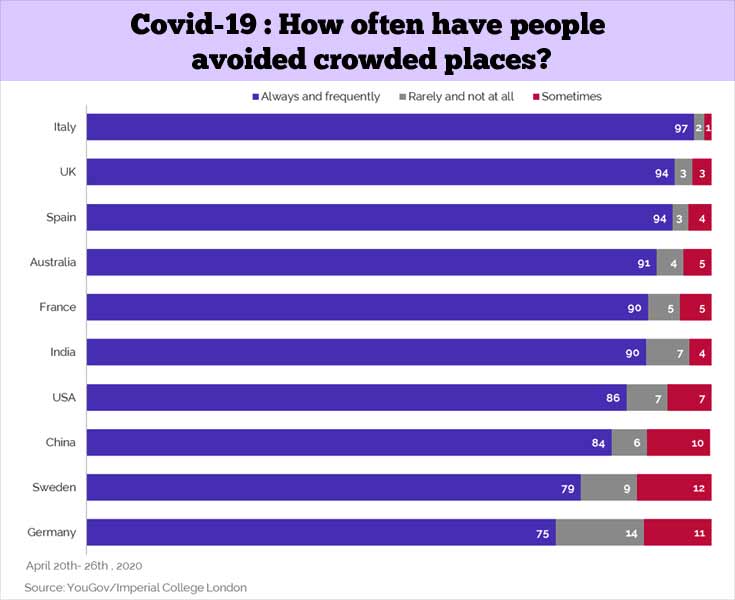 Although health authorities are constantly urging and recommending symptomatic people to self-isolate, not many people in India have adequate means to quarantine themselves completely. When asked about the ability to self-isolate on the advice of a healthcare professional, although 72% Indians are willing (very or somewhat) to do so, only 50% find it somewhat or very easy to self-isolate.

43% would self-isolate if they felt unwell or had any of the symptoms related to COVID-19 such as a dry cough, fever, loss of sense of taste or smell, or difficulty breathing. The numbers were much lower for people living in houses with just one toilet (36%) as compared to those having two toilets (43%) or more than that (54%). 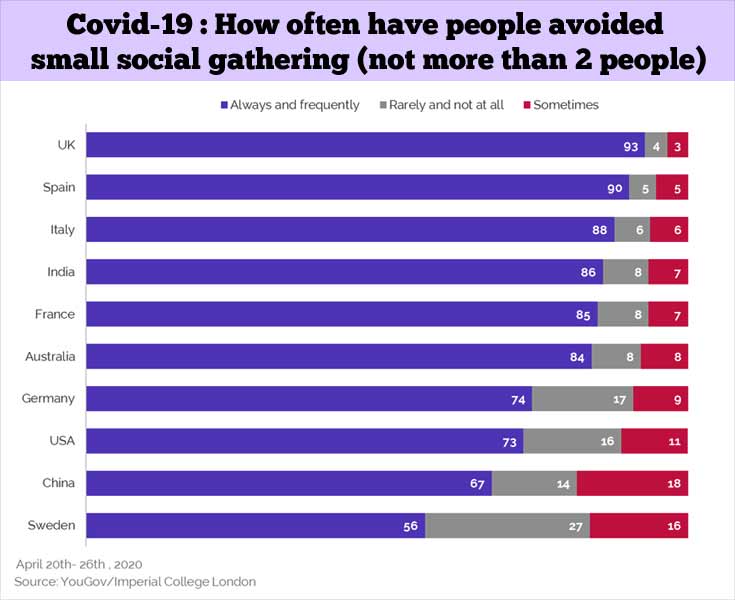 US FDA Authorizes Test That Diagnoses Coronavirus in 45 Minutes
US Food and Drug Administration has authorized a coronavirus test that can deliver a COVID-19 diagnosis in 45 minutes.

Neck Cracking
News Archive
News Resource
Advertisement
News Category
Milestone In Voluntary Blood Donation Achieved Samsung Reinvents Toilet for the Poor Which is a Better Form of Exercise: Daily or Weekly? First Phase of Foot-and-Mouth Disease Vaccination Shocking News: Polio Cases Return After a Decade in the US
More News
Sign up for Wellness Consult a Doctor Sign up for Selfcare