Is Dual Antiplatelet Drug Therapy Safe Beyond One Year of Coronary Stenting?

A study published in the JAMA Cardiology evaluated the risk of death due to ischemic or bleeding events following long-term treatment with antiplatelet medications.

Antiplatelet medications like aspirin, clopidogrel and prasugrel prevent the clotting of blood within the circulation and maintain it in the fluid state. When used following a heart attack, they prevent recurrences of the attacks. A heart attack occurs when the blood flow through the coronary arteries, the arteries supplying blood to the muscles of the heart, is blocked by a clot within the circulation, thereby causing ischemia of the muscle tissue.
Is Dual Antiplatelet Drug Therapy Safe Beyond One Year of Coronary Stenting?


Antiplatelet drugs are also used following coronary stenting. Coronary stents are small tubes introduced into the coronary arteries. They keep the arteries that have previously been affected by a clot remain open, thereby maintaining blood flow to the heart. However, clots can also form on the stent, which are prevented by antiplatelet drugs prescribed to these patients. Dual antiplatelet drug treatment is usually preferred, that is, using two antiplatelet drugs, each with a different mechanism of action, so that an additive effect is obtained.


Research teams studied the long-term use of dual anti-platelet drugs (aspirin and clopidogrel or prasugrel) in patients who underwent coronary stenting. They used the data obtained from the Dual Antiplatelet Therapy (DAPT) Study for their analysis. In the study, following one year of treatment with dual antiplatelet drugs, the patients who did not suffer from major side effects from the treatment received either two anti-platelet drugs, or aspirin with a placebo for a period of 18 additional months. Data was collected over a 21-month period between a year and 33 months after coronary stenting. 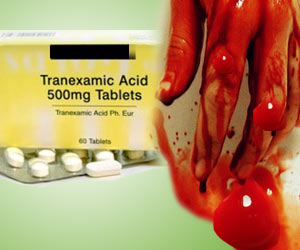 Common Drug Found Effective in Reducing Death by Bleeding
Rapid treatment with tranexamic acid can save patients with severe bleeding whether from accidents or violence.
READ MORE