Written by Amrita Surendranath, B.Sc, M.Sc.
Article Reviewed by The Medindia Medical Review Team on May 5, 2017 at 5:21 PM
Health In Focus

Technological advancements have dramatically increased the number of hand held devices, from smartphones to tablets to electronic games. As the number of these devices increase, children are beginning to spend more time with these devices, sometimes even before they learn how to talk. A research study that was presented at the Pediatric Academic Societies Meeting (2017) has found that such children are at a higher risk for speech delays. The study titled "Is handheld screen time use associated with language delay in infants?" details the harm that it could lead to if small children are given handheld devices to play with.

Handheld Device Use Among Small Children:

Children are exposed to devices, both at school, as well as at home. Schools have begun instructing children to use hand held devices to complete their tasks, especially among younger children who haven't learnt how to write.
Increased Handheld Screen Time Could Delay Speech In Infants

Parents tend to keep children "busy" with handheld devices so that they can complete their chores without their young ones seeking their attention. This is a common sight in public places like restaurants and at home.


‘Handheld devices include smartphones and tablets that are portable and easy to carry. Infants these days are increasingly exposed to such devices, thereby increasing their risk of speech delay.’


The negative aspect is that such indiscriminate use of technology can lead to transient changes in the mood as well as long term changes in the brain. This is similar to the effects of consuming a high sugar soda, whose short term effects include sudden bursts of energy that could lead to hyperactivity in a child, and which, in the long run, also increases the risk for chronic diseases like diabetes.

The Mozart effect is a transient elevation in the mood; it is the effect of any experience like listening to music or playing video games that have the ability to manipulate mood. Earlier studies have shown that excessive use of technology can lead to aggressive behavior among children.

In the current study, 894 children aged between 6 months and 2 years, who participated in the TARGet Kids, which is a practice-based research network in Toronto, were studied between 2011 and 2015.

After the initial screening, the children were reviewed after 18 months and the study findings were
The lead author of the study, Dr. Catherine Birken, said that the use of handheld devices have become rampant even though a lot of caution has been advised over their use by pediatricians. With newer and more entertaining features being incorporated everyday, that are both colorful and captivating to the eyes and the ears, toddlers are increasingly drawn towards these gadgets. This is the first study that reports the possible connection between the use of handheld device and delays in expressive speech.

Recommendation by the American Academy of Pediatrics

The results of the study, according to Dr. Birken, are in accordance with the American Academy of Pediatrics' recent policy, that recommends discouraging the use of any type of screen media among children who are younger than 18 months.

The scientists associated with the study stated that further research was needed to determine
Screen Time For the Current Generation:

There is access to movies and games for children, much more than it was ever there before
A lot of shows are especially designed for the young audience, but studies have shown that the content in these shows may not be effective. The shows that are marked as educational may be very difficult for the child to understand, with a risk of being exposed to too much light and sound. Many children are also exposed to a lot of shows meant for adults, as the adults in the family watch the shows when the children are in the room.

The current study shows that the visual display experience by toddlers while watching handheld devices could delay their ability to begin speaking, a developmental delay that can be prevented by restricting access to such gadgets. 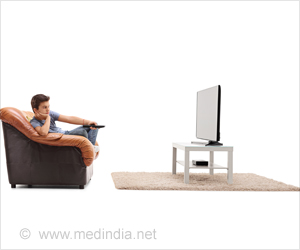 Excessive Screen Time Raises Diabetes Risk Among Children
Children exposed to 3 hours or more of screen time have an increased risk for type 2 diabetes, raising concerns about the health of children
READ MORE

Pediatricians Set New Guidelines For Entertainment Media Exposure For Children
Researchers say too much media or the wrong type of content may affect kids' health and development and affect their relationships with family and larger world.
READ MORE