The researchers examined the gut microflora and body weight in 84 children and teenagers between the ages of seven and 20 years. Twenty-seven participants were obese, 35 were severely obese, seven were overweight and 15 were normal weight. Gut microflora of the participants' was analyzed. Body fat partitioning measured using MRI and blood samples were collected. The participants' food intake was assessed with a three-day food diary.


‘Obese children had higher levels of short- chain fatty acids produced by some types of gut bacteria, which are associated with the production of fat in the liver.’


The findings showed that eight groups of gut microflora were linked to the amount of body fat. In obese children and teenagers, four microbial communities tended to flourish compared to the lean counterparts. Other four microbial communities were in smaller amounts in participants who were obese compared to children and teenagers of normal weight. The gut microflora found in obese participants digested carbohydrates more efficiently than the gut microflora in normal-weight counterparts. The researchers also found that obese children tended to have higher levels of short-chain fatty acids in the blood than normal weight children. The study found an association between short-chain fatty acids produced by some types of gut bacteria and production of fat in the liver. Thus, targeted modifications to the specific species of bacteria could help prevent or treat obesity in the future.

Obesity among children and teenagers is one of the most serious public health challenges of the 21st century. About 17 percent of the children and teens in the United States are obese, according to the US Centers for Disease Control and Prevention.

"Our findings show children and teenagers with obesity have a different composition of gut flora than lean youth," said the study's senior author, Nicola Santoro, MD, PhD, Associate Research Scientist in the Department of Pediatrics at Yale University in New Haven, Connecticut. "This suggests that targeted modifications to the specific species composing the human microbiota could be developed and could help to prevent or treat early-onset obesity in the future."

Short-chain fatty acids are converted to fat within the liver and then accumulate in the fat tissue, said Santoro. "This association could signal that children with certain gut bacteria face a long-term risk of developing obesity."

Studies conducted previously have linked obesity to changes in gut microbial composition and physiology. According to a study published in the journal Nature, (2009), obesity is associated with phylum-level changes in the microbiota, reduced bacterial diversity and altered representation of bacterial genes and metabolic pathways.

A study published in Molecular Metabolism, (2016), showed that changes in gut microflora composition contribute to obesity by affecting the production of satiety-inducing signals. Restoring gut microbial homeostasis by consuming probiotics, therapeutic microbes and certain fibers could prevent or treat obesity.

Another study published in Environmental Microbiology, (2016), found that childhood obesity was associated with an altered microflora characterized by higher levels of Firmicutes and lower levels of Bacteroidetes. Short-chain fatty acids are metabolites produced by gut bacteria, which was higher in obese children, suggesting a strong link between microbiota and obesity. 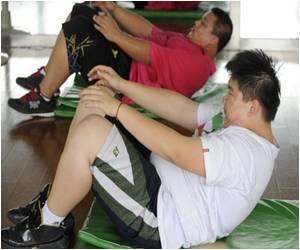 Aerobic Exercise and Resistance Training Best Fit To Fight Teen Obesity
A recent study has found that a combination of aerobic exercise with resistance training is the best exercise program to fight the "epidemic" of teen obesity.
READ MORE

Gut Flora Decides How a Body Reacts to High-Fat Diet
A new study has found that the composition of gut flora may be responsible for the different ways that people's bodies react to high fat diet.
READ MORE