Magnesium in Diet Associated With Reduced Risk of Heart Disease, Stroke and Diabetes

Regular intake of green leafy vegetables, such as spinach, legumes, nuts, seeds and whole grains which are rich in magnesium can reduce the risk of various diseases including coronary heart disease, stroke and type-2 diabetes, according to a new meta-analysis.

Research has shown that people in the highest category of dietary magnesium consumption had a 10% lower risk of coronary heart disease, 12% lower risk of stroke and a 26% lower risk of type-2 diabetes compared to those in the lowest category . This research from Zhejiang University and Zhengzhou University in China also indicated that an extra 100mg per day of dietary magnesium could reduce the risk of stroke by 7% and type 2 diabetes by 19%.
Magnesium in Diet Associated With Reduced Risk of Heart Disease, Stroke and Diabetes


Magnesium is a mineral, vital for human health and normal biological functions including glucose metabolism, protein production and synthesis of nucleic acids such as DNA. The main sources of the mineral are foods such as spices, nuts, beans, cocoa, whole grains and green leafy vegetables.


Dr Fudi Wang, lead author from the School of Public Health at Zhejiang University, said, "Low levels of magnesium in the body have been associated with a range of diseases but no conclusive evidence has been put forward on the link between dietary magnesium and health risks. Our meta-analysis provides the most up-to-date evidence supporting a link between the role of magnesium in food and reducing the risk of disease."

Approximately 25gms of magnesium is present in the adult body with 50% to 60% present in the bones and most of the rest in soft tissues. The blood serum has less than 1% of total magnesium and these levels are kept under tight control.

The normal serum magnesium concentrations range between 0.75 and 0.95 millimoles (mmol)/L. The kidneys maintain magnesium homeostasis and typically excretes about 120 mg magnesium into the urine each day. When magnesium status is low, urinary excretion is reduced.

Magnesium also regulates the active transport of calcium and potassium ions across cell membranes, a process that is important to nerve impulse conduction, muscle contraction, and normal heart rhythm.

The Atherosclerosis Risk in Communities study assessed heart disease risk factors and levels of serum magnesium in a cohort of 14,232 white and African-American men and women aged 45 to 64 years. After 12 years of follow-up, a 38% reduced risk of sudden cardiac death was observed in individuals with serum magnesium of least 0.88 mmol/L compared with individuals in the lowest quartile of 0.75 mmol/L or less.

Dietary Approaches to Stop Hypertension (DASH) diet rich in fruits and vegetables, low-fat or non-fat dairy products, and less fat overall was shown to lower systolic and diastolic blood pressure by an average of 5.5 and 3.0 mmHg, respectively. Though other nutrients such as potassium and calcium also reduce blood pressure, the independent effect of magnesium could not be determined.

An additional 100 mg/day magnesium in the diet was associated with an 8% decreased risk of total stroke. In a meta-analysis of 7 prospective trials with a total of 241,378 participants, the risk reduction was observed especially in ischemic rather than hemorrhagic stroke. Von Willebrand factor levels were positively associated with the incidence of ischemic stroke. Low levels of serum magnesium increased the levels of Von Willebrand factor, increasing the risk of ischemic stroke.

Diets with adequate amounts of magnesium are associated with a lower risk of diabetes due to the important role of magnesium in glucose metabolism. Hypomagnesemia or serum magnesium levels less than 0.75mmol/L might cause insulin resistance, the inability of insulin to be utilized by the cells to absorb glucose for energy production. Diabetes leads to increased urinary losses of magnesium, and the inadequacy of magnesium might impair insulin secretion and action, thereby worsening diabetes control.

The meta-analysis involves observational studies which take into account the effect of other biological or lifestyle factors influencing the results. Though it is also not possible to determine if magnesium is directly responsible for reducing disease risk, the large size of this analysis provides robust data that were stable when adjusting for gender and study location. The findings reinforce the notion that increased consumption of magnesium-rich foods could be beneficial for overall health.

Magnesium
Magnesium is one of the most important minerals which a healthy body needs. Today, physicians recognize the importance of magnesium, as it helps maintain normal nerve and muscle function, boosts immunity, treats heart problems and strengthens your ...
READ MORE

Magnesium: For Good Health
Magnesium is essential for normal functioning of enzymes. Depletion of magnesium, due to poor diet and mental stress results in irregular heartbeats, nausea and confusion.
READ MORE 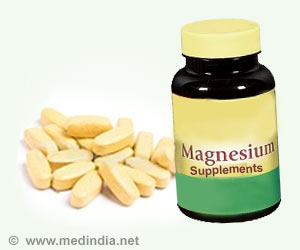 Deficiency of Magnesium
The symptoms of magnesium are common to other deficiencies, the best course would be to eat enough of magnesium rich food. A daily supplement of magnesium could be added on a physician's advice.
READ MORE