Written by Shaun DMello
Medically Reviewed by The Medindia Medical Review Team on May 26, 2015 at 11:58 AM 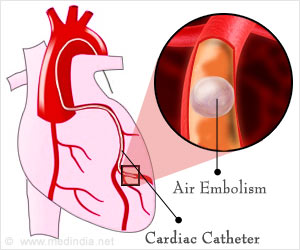 An embolism is a medical term used to describe the condition in which a person's blood flow is obstructed because of a blockage that forms in a blood vessel. Such blockages could form due to a variety of reasons, including the formation of a blood clot or the presence of foreign matter in the bloodstream.

While these emboli, as they are referred to collectively, may form or be introduced into the bloodstream in a very specific location, but from there they can move to almost any other part of the body via the bloodstream. Once the emboli get lodged in a particular location to form a blockage it begins to cause health problems.
Advertisement

Emboli may be comprised of blood clots, but they can also comprise of fat, cholesterol, tissue or tumor, and in rare cases even air. This would naturally be described as an air embolism. Any situation in which an embolism develops may be classified as small and multiple or single and massive and this also holds true in the case of air embolisms. Like all emboli, an air embolism can also be life threatening and the situation warrants emergency medical care. An air embolism is fortunately a rare occurrence that arises when an air bubble gets trapped within your blood and it eventually causes a blockage.


A coronary air embolism describes the condition of an air embolism formed during the process of cardiac catheterization. This is a procedure that is used as either a diagnostic tool for heart disease or treatment procedure for certain coronary heart disease conditions. The catheter is usually inserted via the groin or arm and it can help to establish the need for heart surgery as well. Unfortunately, in some cases a massive coronary air embolism may develop as a complication of the procedure, with the incidence of this being as low as 0.1% to 0.3%.


Why Does it Occur?

A massive coronary air embolism may develop when the catheter that is used for vascular procedures is not subjected to adequate aspiration and flushing as is the normal procedure. A loose Y-adapter connection could also be responsible for the problem. The complication may also develop when a balloon catheter or guide wire is being introduced or withdrawn. In extremely rare cases, the balloon may rupture when it is being inflated and the resultant movement of air from the catheter to the coronary system causes a coronary air embolism. The effect of such an air embolism depends on the volume of air that is trapped and the rate of accumulation. While a volume of 3-5ml/kg would be fatal to humans the rate of transmission of air via a needle is about 100ml per second, which is fast enough to be lethal. If air is entrained gradually over a prolonged period of time the heart can withstand a considerable amount of air. In case of coronary air embolism, the condition can trigger a hemodynamic compromise very rapidly resulting in an emergency situation.
Advertisement
Patients who develop coronary air embolisms may suffer from symptoms that include angina or chest pain, high blood pressure and changes indicative of myocardial ischemia. Arrhythmias, atrial fibrillation, ventricular tachycardia, heart blocks and in worst cases a patient may even experience cardiac arrest and succumb to death.


How Can it be Treated?

Treatment for massive coronary air embolism typically depends on the use of 100% oxygen as an emergency measure to minimize ischemia and to encourage the elimination of gas within the air bubble through the establishment of a diffusion gradient. In addition, medical experts have also found that certain mechanical interventions to attempt dispersal and the use of non-dedicated equipment for aspiration or a dedicated aspiration catheter can yield good results. The condition can be resolved very quickly if treatment is provided promptly. According to reports published based on recorded cases massive coronary air embolisms need not be fatal any longer. Guiding catheter systems can be used without any safety concerns and 100% air oxygen administration in combination with the use of atropine and epinephrine is effective in resolving intracoronary air embolisms.

Still in other cases of acute coronary syndrome resultant from coronary air emboli treatment using the aspiration system has also proven to be very effective. Studies even suggest that the method of intracoronary catheter aspiration be used as a standard procedure in the treatment of air emboli because of its success in the distal section of an obtuse marginal artery. Aspiration is also found to be better than the use of methods of disruption or dislodgement of the embolism with forceful saline injections or guide wire as the fragmentation of emboli naturally results in smaller and more widespread embolizations. This can unfortunately result in damage to the distal microvasculature.

Deep Vein Thrombosis (DVT) Risk Calculator
Is your movement restricted for a prolonged duration due to surgery or other reasons? Are you ......

Cardiac Catheterization
Cardiac catheterization is a radiological procedure for both diagnosis and treatment of heart ......