Caffeine Intake in Moderation During Pregnancy Safe for Baby's IQ 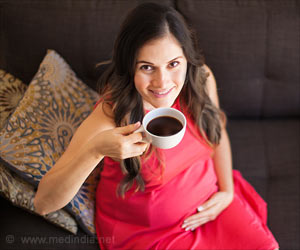 Most of the pregnant women choose to cut out caffeine completely to ensure safety. However, numerous studies have shown that moderate amounts of caffeine are unlikely to harm the mother and the unborn baby.

Now a new study indicates that pregnant women drinking or eating moderate amounts of caffeine should not be worried about their child's intelligence.

Coffee Effects on Pregnancy, Breastfeeding, Abortion
Decaf coffee or avoiding coffee is better for baby if you are pregnant. If you do drink have a maximum of a cup or two.
Advertisement
‘Moderate amounts of caffeine during pregnancy do not affect the childs intelligence quotient (IQ) and behavior in later childhood.’

The study from the Research Institute at Nationwide Children's Hospital (RINCH), Columbus, Ohio, shows that taking caffeine in moderate amounts during pregnancy is not linked to a reduced intelligence quotient (IQ) in the child or increased behavioral problems.


"We did not find evidence of an adverse association between maternal pregnancy caffeine consumption with child cognition or behavior at 4 or 7 years of age," said Mark A. Klebanoff, MD, researcher at the Center for Perinatal Research at the RINCH. Klebanoff is also a faculty member at The Ohio State University College of Medicine.

Is a Vegetarian Diet Safe During Pregnancy?
Great care must be taken with diet during pregnancy for the baby's healthy development. Being vegetarian is not a minus but dietary recommendations must be followed closely for a healthy pregnancy.
Advertisement
Scientists looked at a marker of caffeine in the blood of 2,197 expectant mothers who participated in the Collaborative Perinatal Project, conducted at multiple locations in the United States in 1959-74.

This was an era when caffeine intake during pregnancy was more prevalent than today, as there was little concern about the safety of caffeinated drinks. Therefore, the investigators were able to analyze a broader range of caffeine intake than if a similar research was done today.

They scrutinized the relation between a chemical known as paraxanthine, caffeine's primary metabolite, at two points in pregnancy. They compared those levels to the kid's intelligence and behavior at four and seven years of age.

Results of the comparison showed that there were no consistent patterns of maternal caffeine ingestion and the development and behavior of those kids at those points in their lives.

The study was published in the American Journal of Epidemiology.

This study follows an earlier research regarding caffeine intake during pregnancy conducted by Dr. Klebanoff and Sarah Keim, principal investigator in the Center for Biobehavioral Health at the RINCH. It was published in the Journal Epidemiology, March 2015 edition. The study involved the same group of women from The Collaborative Perinatal Project. It showed that increased ingestion of caffeine during pregnancy did not raise the risk of childhood obesity.

Of the children in the research, about 11% were considered obese at four years and around seven percent were obese at seven years. However, the investigators found no link between their mother's caffeine consumption and incidents of obesity.

"Taken as a whole, we consider our results to be reassuring for pregnant women who consume moderate amounts of caffeine or the equivalent to 1 or 2 cups of coffee per day," said Dr. Keim.


Too Much Coffee Unsafe During Pregnancy

Lots of food items such as chocolate, tea, and coffee contain caffeine. It's also found in soft drinks, energy drinks, and cold and flu remedies. High levels of caffeine during pregnancy can put both mother and the child at several health risks. Too much caffeine can cause a miscarriage. Higher caffeine intake can also result in children having a low birth weight, which can increase the risk of health issues in later life. A 2002 study demonstrated that women who drank 8 or more coffees (>800mg) were at an increased risk of early stillbirth.


How Much Caffeine is Safe?

Pregnant women should not take more than 200mg of caffeine a day.

Experts recommend that expectant mothers consume no more than 300mg per day. Restrict the amount of energy drinks you have because they can be high in caffeine. Recommended drinks during pregnancy include decaffeinated tea and coffee, fruit juice or water.

Pregnant Women Who Consume Caffeine-based Beverages Every Day may Have Obese Kids
Kids born to mothers who drank more than 150 milligrams of caffeine daily, equivalent to a medium-sized cuppa, were 2.3 times more likely to become obese.

Consumption Of Caffeine and Energy Drinks on a High in India: FSSAI
Food safety experts in India conduct a survey on the consumption pattern of caffeinated beverages and energy drinks across the country.

Color Blindness Calculator Pregnancy Confirmation Calculator Indian Medical Journals Sinopril (2mg) (Lacidipine) Accident and Trauma Care Nutam (400mg) (Piracetam) A-Z Drug Brands in India Diaphragmatic Hernia Drug Side Effects Calculator The Essence of Yoga
This site uses cookies to deliver our services.By using our site, you acknowledge that you have read and understand our Cookie Policy, Privacy Policy, and our Terms of Use  Ok, Got it. Close
×