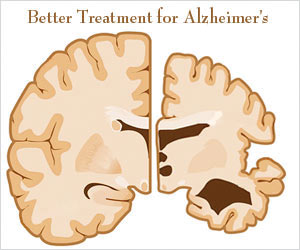 A new study that recently appeared in the Scientific Research Publishing has demonstrated that the transcatheter laser treatment gives better results for patients with Alzheimer's disease as compared to the common conservative treatment.

Alzheimer's disease is the most common form of dementia. Globally, death rates for the disease are increasing. According to health experts, about 500,000 new cases are going to appear in the United States alone in the coming year.


The concept that disorders of the brain vascular system played a vital role in the causation and development of the disease were expressed a quite a long time ago. It has been suggested that blood flow to the brain including in the small vessels like capillaries could be affected in patients with Alzheimer's disease.

Scientists examined as many as 165 patients with Alzheimer's disease. After conducting examinations including clinical assessment of dementia severity (CDR), cognitive function assessment (MMSE), blood tests and tests on the brain, a total of 89 patients aged between 34 and 79 were selected for the study which included 31 (34.83%) male, 58 (65.17%) female patients.

The patients were divided into four categories according to their disease stage. There were as many as 10 patients in TDR-0 - preclinical stage, 28 in TDR-1 - early stage with mild dementia, 34 in TDR-2 - medium stage with moderate dementia, 17 in TDR-3 - late stage with severe dementia.

The test group with 46 patients from different stages were given transcatheter treatment with low-energy lasers. During this treatment, a catheter is introduced into an artery of the leg and is advanced into the arteries of the brain, where the laser is administered.

The control group with 43 patients had conservative treatment with the anti-Alzheimer drugs, memantin, rivastigmine, piracetam or choline alfoscerate.

The test group had improved microcirculation in the brain, which was demonstrated through angiographic studies. They showed reduction in dementia and recovery of cognitive function that was reduced by Alzheimer's disease. Also, the treatment transferred some of them to a lighter TDR group.

On the other hand, the control group with earlier AD stages (TDR-0, TDR-1, TDR-2) were stable for a variable period of 6 months-3 years. But they suffered a subsequent increase in dementia and cognitive impairment. Moreover, the control group patients with late AD stage (TDR-3) showed further deterioration in terms of dementia and cognitive impairment.

The researchers did not note any major complications with the transcatheter laser treatment. Thus, they suggest that this treatment is relatively safe and effective in treating patients of Alzheimer's disease.

Aspirin to be Tested for Its Effect on Dementia
Clinical trial to be conducted to prove or disprove the effects of aspirin in dementia and to determine if the benefits outweigh the risks.
READ MORE