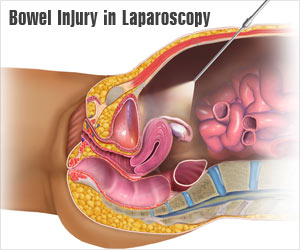 Laparoscopic bowel injury following gynecological surgery carries a high rate of mortality if the injury is diagnosed postoperatively rather than during the operation, a new study revealed.

Laparoscopy surgery uses a laparoscope - a slender, lighted telescope - to look inside the abdominal cavity and carry out surgical procedures. Major advantages of laparoscopy over laparotomy or open surgery include less pain after the surgery, shorter hospital stay, and reduced blood loss.

Researchers selected studies and trials that reported the incidence of bowel injury due to gynecologic laparoscopy procedure published between 1972 and 2014.

The studies were taken from the PubMed, EMBASE, ClinicalTrials.gov, and Cochrane Library databases. Researches were excluded if they were not in English or had duplicated data. Finally, as many as 90 studies met eligibility criteria.

The analysis was aimed at determining the rate of bowel injury in gynecologic laparoscopy, rate of mortality due to the injury, causes of bowel injury, and location of injury within the gastrointestinal tract.

The systematic review recorded a total of 604 bowel injuries from the 90 studies due to gynecological laparoscopic procedure; the incidence of the injuries worked out to 1 in 769 procedures. The rate of bowel injury depended on the reason for the procedure, ranging from 1 in 3,333 for sterilization to 1 in 256 for the surgical removal of the uterus, known as hysterectomy.

The small intestine was found to be the most frequently damaged region of the gastrointestinal tract, with 166 injuries out of the 354 injuries in which the location had been described.

The majority of bowel injuries occurred during the initial stage of obtaining an abdominal access and insufflation. This is the act of inhaling inserting gas into the body cavity using a Veress needle or trocar placement.

Most bowel injuries were recognized intraoperatively or during surgery, but the diagnosis was delayed by more than 24 hours in 154 of 375 cases where the time of recognition of injury was mentioned. Bowel injuries were managed mainly by open surgery.

The researchers highlighted that death occurred after bowel injury at a rate of 1 of 125 cases included in the study. All deaths occurred in cases of delayed recognition of bowel injury. There were no deaths recorded when bowel injury was diagnosed during the surgical procedure.

In their study, the researchers thus highlight the importance of recognizing bowel injury early during gynecological laparoscopic surgeries. The study was published in the Obstetrics & Gynecology, the official publication of the American College of Obstetricians and Gynecologists.