Health Apps in iPhone Might Underestimate Physical Activity of Users 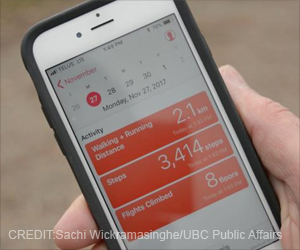 The iPhone's built-in pedometer missed about 1,340 steps during a user's typical day when compared to a purpose-built accelerometer worn on the waist.

The accuracy of smartphones and health apps is becoming more important as medical experts and technology companies rush to tap into the smartphone's enormous potential as a tool for gathering health data. Almost everyone has a smartphone, and they're usually handy, making it easy for an average person to participate in a study, and for scientists to gather data.

Advertisement
‘The iPhone underestimated the accelerometer data by an average of 21.5 percent, or 1,340 steps per day.’

"In order to make accurate conclusions, we as researchers need to know that the data is actually representative of real behavior," said Mark Duncan, the study's lead author. "That has major impacts in terms of patient care, and in terms of developing new and better research in the field."


How Accurate is Your Smartphone App in Activity Assessment?

The UBC study involved 33 participants and was divided into two parts: a laboratory test and a test in regular living conditions. In the lab test, participants carried two iPhones--a personal iPhone and a shared one provided by the lab--so researchers could see if different phone models produced different results.
Advertisement
Participants walked on a treadmill for 60 seconds at various speeds and their steps were counted manually. Personal iPhones underestimated steps by 9.4 percent at the slowest speed of 2.5 km/h. The shared iPhone fared slightly better at 7.6 percent. At faster walking speeds, the phones were off by less than five percent, which is generally considered acceptable for a pedometer.

For the other part of the study, participants fixed accelerometers to their waists for a full day and recorded step readings from the iPhone at the beginning and end of the day. Over three days, the iPhone underestimated the accelerometer data by an average of 21.5 percent, or 1,340 steps per day.

The technology is not entirely to blame, though. Several participants reported leaving phones behind during short trips to the bathroom or the water cooler. And daily living often involves slower walking speeds, which the lab test showed can affect accuracy.

"The accelerometer in the iPhone actually does a pretty good job when tested under lab conditions," said senior author Guy Faulkner. "You just have to have it on you at all times."

The results suggest researchers should use caution when relying on smartphone data, but Duncan said the average person shouldn't be discouraged from using health apps for motivation.

"For people who are already tracking their steps, they can rest assured that if their phone says they're getting the recommended 10,000 steps in a day, they are probably getting at least that many, and they are working toward better health," said Duncan. "From a public health point of view, it's better than it underestimates than overestimates."

Can Accelerometers, Fitness Trackers Be Used For Research?
Activity monitors are helpful to assess daily physical activity but they may need to be upgraded ......

Using GPS Technology and Accelerometers to Predict Football Injuries
Footballers' injuries may be predicted by looking at players' workloads during training and ......

Scientists Say Amount and Not Frequency of Exercise That Matters
Exercising once a week has equal benefits as daily workouts as long as you exercise for 150 minutes ...

Sedentary Nature of Job of Bus Drivers Could Lead to Increased Health Risk
A new study reveals that prolonged sitting during and after-work hours for bus drivers due to the .....