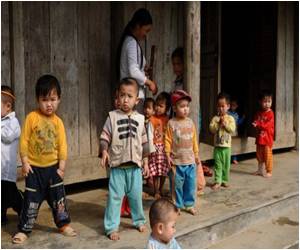 The hand-foot-mouth disease, a contagious viral disease particularly affecting infants and children, has hit over 10,000 Vietnamese.

Nguyen Van Binh, head of the ministry's Preventive Health Department, said the disease has spread to 60 of the country's 64 provinces, Xinhua reported.

The disease shows symptoms of fever and a rash most frequently seen on the palms of the hands, soles of the feet, and inside the mouth.

A four-month-old baby died in southern An Giang province Feb 28, just one day after contracting the virus.
Advertisement
The same viral toxicity has been seen in Cambodia, where 54 children recently died within 24 hours of contracting the disease.

The disease can be transmitted though digestive tracts. There are no vaccines or specific medicines to combat the disease and children under five are most vulnerable to it.

The main preventive measures are following hygienic practices in eating and drinking.

In 2012, the disease affected 151,100 people, of which 45 died, according to Vietnam's official records.
Advertisement
<< French HIV Patients Drug-free and Healthy
Teens, Alcohol, Cameras and Sex - a Dangerous Foursome >>

Hand-Foot-Mouth Disease Affects 11,000 in China
Chinese health authorities have confirmed that over 11,000 people have been affected and at least .....

First Hand-foot-mouth Death Confirmed in Shanghai
Shanghai health officials have confirmed the first death in the city of hand, foot and mouth ......