Gutkha Baron and Chairman of Manikchand Group Dies at 78 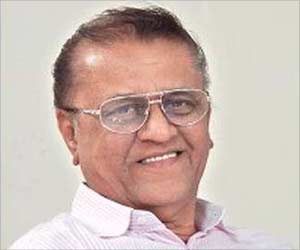 Rasiklal Manikchand Dhariwal, an industrialist, and chairperson of the Manikchand Group died on Tuesday evening at Ruby Hall Clinic, Pune. He was 78 and died of pneumonia and multi-organ failure.

Dhariwal was admitted to the hospital on September 4th, as he was diagnosed with parotid cancer a year ago and has been on treatment ever since at HCG cancer hospital in Bengaluru and Ruby Hall Clinic in Pune.

Advertisement
‘Rasiklal Manikchand was suffering from parotid gland cancer and died of pneumonia and multi-organ failure.’

He was popularly known as the "gutkha baron" and hails from a small town of Shirur in Pune district.


He lost his father at the age of 14 and inherited the bidi factory with 20 workers.

Later, he successfully transformed this into the Manikchand Group of businesses, which deals with chewable tobacco and gutkha.
Advertisement
He had also established a textile factory at Ahmednagar, ventured into many other industries like pan masala, mouth fresheners, electrical switches, packaged water, and real estate. He was also politically very active.

Dr. Purvez Grant, chairman and chief cardiologist of Ruby Hall, said, "Dhariwal was not keeping well for a long time. Owing to his old age, he could not recover from the infections in his body. He died because of pneumonia and multi-organ failure after a prolonged illness."

He is survived by his wife Shobha, four daughters and a son.

Exploring Morbidity and Mortality Associated With Leprosy
Leprosy shows up in different populations in different ways. It's very rare in the US, but is still ...

Risk of Multiple Co-morbidities Linked With Binge Eating
Individuals with binge eating disorder are at risk for high blood pressure, elevated glucose and ......