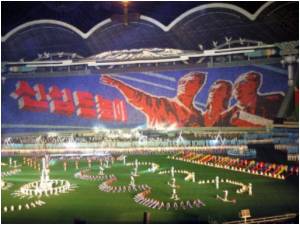 A German gymnast has been named the world's Oldest Gymnast in this year's Guinness World Records.

Johanna Quaas has shown that age is no barrier to sporting achievement and amazed presenters, Holly Willoughby and Phillip Schofield, of TV program This Morning, where she appeared, with her display of strength and agility on the parallel bars.

It is reported that a blind South African man has earned a spot in the Guinness Book of World Records by driving a car at 200 miles per hour.
Advertisement

According to the Daily Mail, Quaas from Leipzig performed a flawless routine live on the TV, which included scissor twists, hand stands and a perfect dismount.


Holly could be heard whispering 'oh my gosh' in astonishment as Johanna displayed strength and speed against her age.

Before Johanna took to the bars, Holly asked her if she ever felt aches and pains as a result of her exercise regime.

Thousands of people across the globe attempted to break curious world records by stripping down to bikinis, cuddling strangers in railway stations and dragging buses with their hair.
Advertisement
Johanna replied via a translator: "Not at all, as soon as I wake up, I'm an early bird so my morning routine is running up and down the stairs."

She said that she had been born into a family of gymnasts and did the sport as a child.

However, she gave it up to get married and have children and then 'picked it up again' in her fifties, performing in her first competition at the age of 56.

"It is great feeling to be included and I hope the record inspires others to realise it's never too late," she said.

Come July 31, and educational institutions, government departments and NGOs in Uttar Pradesh will vie to plant the most number of saplings ever, to set a world record
Advertisement
<< Lunch Hour is History
Negative Anti-obesity Campaigns More Likely to Fail Than Su... >>