First-time guidance on how primary care physicians and parents can determine appropriate treatment on red diaper syndrome and other impacts on breastfeeding have been reported in Breastfeeding Medicine.

A case study and subsequent literature review has concluded that absent signs of clinical infection, breastfeeding should continue normally when mother and baby are diagnosed with Red Diaper Syndrome (pink-colored breast milk and pink-colored soiled diapers) caused by Serratia marcescens, an opportunistic bacteria.

The article entitled, "Serratia marcescens Colonization Causing Pink Breast Milk and Pink Diapers: A Case Report and Literature Review," is co-authored by Laura Quinn, Elizabeth Matthews, Ann Kellams, Debbie-Ann Shirley from the University of Virginia School of Medicine (Charlottesville, VA) and Melody Ailsworth, Richeson Drive Pediatrics (Lynchburg, VA). The study looked at the case of an 11-week-old infant being treated for fussiness, and whose soiled diapers and clothing turned pink. The nursing mother also reported pink nursing pads. Additionally, similar studies involving nine other infants were also reviewed. The authors concluded that there isn't enough evidence to support treatment of the bacteria in otherwise healthy babies and mothers should be reassured that they can continue with breastfeeding in these circumstances.


"Knowledge that this bacteria is generally not pathological and clinical judgment should thus be the physician's guide," says Arthur I. Eidelman, MD, Editor-in-Chief of Breastfeeding Medicine. 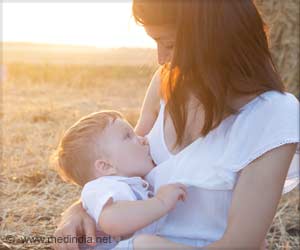 Breastfeeding may Have Long-term Benefits on Mothers Heart Health
Breastfeeding may have long-term heart health benefits for some moms. Lactating for six months shows improved markers of cardiovascular health a decade later. Women may be able to reduce their risk of heart disease by breastfeeding for at least six ...
READ MORE