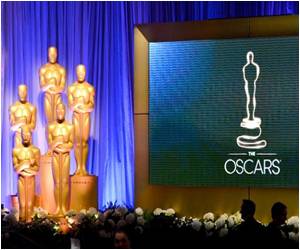 A young German filmmaker won the best foreign movie student Academy Award at a film-school version of the Oscars.

Student directors from British, Israeli and US institutes were also among winners as organizers announced medal placements at the 41st Student Academy Awards show.

Italian heart surgeon Gino Strada, whose work in Sudan is part of a documentary that is up for the Oscars, revealed that he would rather stay in Sudan.
Advertisement

Lennart Ruff of Munich's University of Television and Film won gold in the foreign movie section for "Nocebo," about a man who escapes a drug study when he discovers a fellow participant has died.


"I feel like I'm in a dream," Ruff told AFP, adding that the medal placement wasn't that important, "because the attention you get, that's the most important thing.

Brit star Colin Firth and Natalie Portman win the Oscars for their performance in The King's Speech and Black Swan respectively.
Advertisement
"It's not about getting awards," said the 28-year-old, who listed his cinematic heroes as including German Robert Schwentke, as well as Stanley Kubrick, Martin Scorsese and many others.

The awards were presented by the Academy of Motion Picture Arts and Sciences, which organizers the Oscars, the climax to Hollywood's annual awards season.

The foreign trio won in one of five sections at the student awards, which saw 12 other laureates from American universities take home prizes.

Here were the medal placements in the other categories:

Gold: "Person" by Drew Brown of the Art Institute of Jacksonville, Florida.

Silver: "Oscillate" by Daniel Sierra of the School of Visual Arts, New York.

Silver: "Higher Sky" by Teng Cheng of the University of Southern California.

Gold: "The Apothecary" by Helen Hood Scheer of Stanford University.

Bronze: "One Child" by Zijian Mu of New York University.

Gold: "Above the Sea" by Keola Racela of Columbia University, New York.

The Academy launched the student awards in 1972 to "encourage excellence in filmmaking at the collegiate level."

Past winners have gone on to secure 46 Oscar nominations and win or share eight Academy Awards. They include big names such as John Lasseter, Pete Docter, Robert Zemeckis, Trey Parker and Spike Lee.

A new study has revealed that Oscar winners in the Best Actress category are at a higher risk of divorce than nominees who do not win.
Advertisement
<< New Way Discovered to Control Genetic Material Altered in C...
Life of Spain's Eight-Year-Old Queen-To-Be >>

A documentary that tracked the history of AIDS epidemic in the US, and which had been nominated for Academy Awards, was screened in New Delhi on Saturday.
Advertisement
News A-Z
A B C D E F G H I J K L M N O P Q R S T U V W X Y Z
What's New on Medindia