Bonn, the former West German capital, has introduced a parking meter for prostitutes, a first in Germany, in order to tax those who just work the streets, a city spokeswoman said Wednesday. 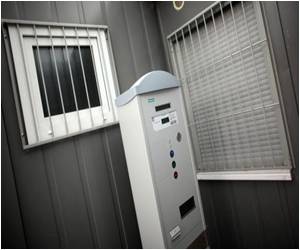 The meter, which looks like one used by drivers for parking their car, was inaugurated at the weekend in an industrial area, near the centre of town, used by prostitutes to solicit clients.

Prostitutes have to pay six euros ($8.6) per night worked, regardless of how many customers they have.

On Monday when the meter was first emptied, 264 euros had been paid in, Klotz said.

Some 200 women are believed to occasionally work the streets in Bonn, but the average overnight tally is 20.

If prostitutes fail to buy a ticket, valid overnight from 8 pm to 6 am, they will first be warned and then fined, she added. Leaflets in German and other languages have been handed out to inform the prostitutes of the new rule.

"Other towns also tax prostitutes but we are the first to have a meter," Klotz said.

"Women who work in brothels also pay the tax. But until now it had been difficult to get women on the street to pay. Thanks to this new method we will be able to tax them in all fairness with the others", she added.

"This has nothing to do with fiscal equality," she said, adding that prostitutes were the only workers to be taxed in such a way.

"We call on the city to remove the meter," she added.

Lot of Prostitutes to Improve

The Supreme Court in India has cited instances from literature to focus on the traumatic life of prostitutes and the responsibility of governments to help them find an alternative life style.