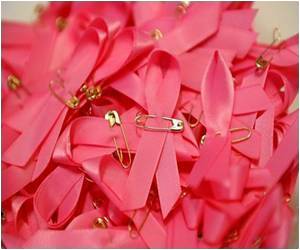 A subtype of breast cancer shares many genetic features with ovarian cancer, say researchers. The findings suggest that the two cancers are of similar molecular origin, which may facilitate the comparison of therapeutic data for subtypes of breast and ovarian cancers.

The researchers, using data generated as part of The Cancer Genome Atlas (TCGA), described new insights into the four standard molecular subtypes based on a comprehensive characterization of samples from 825 breast cancer patients.

The study, a collaborative effort funded by the National Cancer Institute (NCI) and the National Human Genome Research Institute (NHGRI), both part of NIH, was published online Sept. 23, 2012, and in print Oct. 4, 2012, in the journal Nature.

Breast cancer is one of the leading causes of cancer deaths among women. It is often said that a woman who breast-feeds is at a lower risk of developing cancer compared to another who does not .Are these mere old wives tales or is there some truth in it? This quiz on breast cancer has all the details.
Advertisement
Analyses of genomic data have confirmed that there are four primary subtypes of breast cancer, each with its own biology and survival outlooks. These TCGA findings are based on a large number of breast cancer specimens that capture a complete view of the genomic alterations. The four groups are called intrinsic subtypes of breast cancer: HER2-enriched (HER2E), Luminal A (LumA), Luminal B (LumB) and Basal-like. A fifth type, called Normal-like, was observed, but because of small numbers (only eight specimens) the researchers were unable to rigorously study it.

The TCGA Research Network uncovered marked genomic similarities between the Basal-like subtype and serous ovarian cancer. The mutation spectrum, or types and frequencies of genomic mutations, were largely the same in both cancer types. Further analyses identified several additional common genomic features, such as gene mutation frequency, suggesting that diverse genomic aberrations can converge into a limited number of cancer subtypes.

Computational analyses show that Basal-like breast cancer and serous ovarian cancer might both be susceptible to agents that inhibit blood vessel growth, cutting off the blood supply to the tumor, as well as to compounds that target DNA repair, which include chemotherapy drugs such as cisplatin.

The Basal-like subgroup has also been called Triple Negative Breast Cancer because many, though not all, Basal-like tumors are negative when tested for three receptors: the estrogen receptor, the progesterone receptor and human epidermal growth factor receptor 2 (HER2). These receptors can trigger potent cell growth responses and act like a nametag, identifying the cell to the environment. The absence of these receptors means that treatments that target them will most likely be ineffective.

"The molecular similarity of one of the principal subtypes of breast cancer to that found in ovarian cancer gives us additional leverage to compare treatments and outcomes across these two cancers," noted Harold Varmus, M.D., NCI director. "This treasure trove of genetic information will need to be examined in great detail to identify how we can use it functionally and clinically."

According to the World Health Organization, there are approximately 1.3 million new cases of breast cancer and 450,000 deaths worldwide annually. Breast cancer is the most common cancer among women. The majority of cases are sporadic, meaning there is not a family history of breast cancer, as opposed to genetic, where genes predispose a person to the disease. Men can also develop breast cancer, but it accounts for less than 1 percent of breast cancer cases.

Breast cancer tumors that have the HER2 receptor are called HER2-positive, and those that don't are called HER2-negative. When researchers analyzed the genomic findings from tumors determined to be HER2-positive by standard cellular tests, they found that only half of the samples could be characterized as belonging to the HER2E subtype. The other half were characterized as Luminal subtypes, suggesting that there are at least two types of clinically defined HER2-positive tumors.

In general, the Luminal subtypes had the lowest overall mutation rate, but by contrast, had the largest number of genes observed to be significantly mutated. This suggests that each of the genes identified as significantly mutated in the Luminal subtypes is more likely to be important in fueling cancer progression. The Luminal subtypes are characterized by the specific expression signature of multiple so-called transcription-factor genes, including ESR1, GATA3, FOXA1, XBP1 and cMYB. These genes have a complex interaction, cooperating in an orchestrated series of activations. GATA3 and FOXA1 are frequently mutated, but those mutations are mutually exclusive, meaning that mutations were observed in either GATA3 or FOXA1 but never in both. However, ERS1 and XBP1 are highly expressed but infrequently mutated.

The scale of the TCGA program allows researchers to perform the integrative analyses that detect these complex patterns of genomic changes and interactions. This close inspection of the cancer genome has led to a deeper understanding of the mutations essential for cancer progression, and several new candidates were identified in this study. The authors hope that discovery of these mutations will be a crucial step toward improving breast cancer therapies.

This publication focuses on the discoveries made through a combined analysis involving data from 825 breast cancer cases, which are freely available.

Drug - Food Interactions Blood Donation - Recipients Daily Calorie Requirements Nutam (400mg) (Piracetam) Indian Medical Journals Blood - Sugar Chart Loram (2 mg) (Lorazepam) Find a Hospital Accident and Trauma Care The Essence of Yoga
This site uses cookies to deliver our services. By using our site, you acknowledge that you have read and understand our Cookie Policy, Privacy Policy, and our Terms of Use