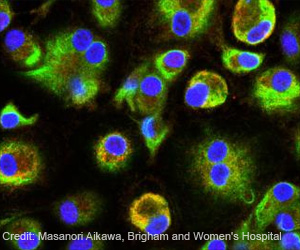 Two novel potential drug targets for treating arterial diseases such as atherosclerosis have been discovered by Brigham and Women's Hospital researchers.

Though the mechanisms that activate macrophages, a type of digestive white blood cell that targets foreign cells, remain incompletely understood, previous research shows that macrophages play an important role in the development of atherosclerosis and its thrombotic complications. Masanori Aikawa, MD, PhD, director of the Center for Interdisciplinary Cardiovascular Sciences (CICS) at the Brigham, his research fellow Hiroshi Iwata, MD, PhD, and colleagues studied atherosclerosis on the protein-level to determine which molecules were most involved in the regulation of macrophages.

Atherosclerosis is a condition in which the arteries become hard and narrow, leading to restricted blood flow.
Advertisement
‘PARP9 and PARP14 - two members of the PARP family of proteins - as regulators of macrophage activation have been linked to atherosclerosis.’


Aikawa founded CICS and hopes that this hypothesis-generating method can be used to streamline the lengthy process of drug development. Aikawa and CICS are using a more systematic approach which hinges on network analysis; this analysis predicts which pathways are most likely to control their studied effect so that they can prioritize these pathways. Ideally, this process would take a fraction of the time in comparison to searching through each individual pathway unaware of their likelihood of affecting their studied effect.

Heart disease is a major killer worldwide in spite of major strides in the medical field in terms of research, diagnosis, treatment and pharmacology. HIV/AIDS and Alzheimer's disease are vying for popular attention these days and people tend to sideline or neglect healthy heart awareness. Take our quiz and refresh your awareness on heart disease.
Advertisement
Aikawa and his colleagues plan to augment these findings to develop targeted therapeutics for atherosclerosis and other diseases.

"Macrophage activation plays a role in not only vascular disorders but also various inflammatory and autoimmune diseases," said Aikawa. "These results could provide important information about the mechanisms of these diseases and help to develop much needed new therapeutics."

Valentin Fuster is undertaking a three year study, known as TANSNIP-H2H, to investigate the relationship between levels of dementia and cardiovascular risk factors.
Advertisement
<< Mobile App to Deal With Dental Emergency
Inhibiting Cell Surface Molecule Could Be Possible Treatment... >>

For the first time, researchers can provide early detection of plaques that have a high likelihood of clotting and/or rupture.

Drug Interaction Checker Post-Nasal Drip Color Blindness Calculator Find a Hospital Drug Side Effects Calculator Daily Calorie Requirements Blood Donation - Recipients Find a Doctor Hearing Loss Calculator How to Reduce School Bag Weight - Simple Tips
This site uses cookies to deliver our services.By using our site, you acknowledge that you have read and understand our Cookie Policy, Privacy Policy, and our Terms of Use  Ok, Got it. Close
×