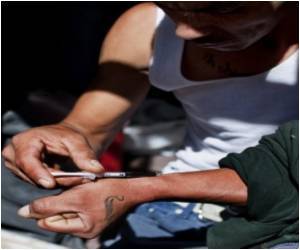 Treatment for drug addiction is affected by a person's genetic makeup, reported in a study. Drug affected individuals have lower gray matter material therefore less number of neurons in areas of the brain. These neurons are essential for decision making, self-control, learning and memory.

Nelly Alia-Klein, a study co-author who is a Brookhaven Lab medical scientist, said, "This research shows that genes can influence the severity of addiction. The results suggest that addicted individuals with low MAOA [monoamine oxidase A] genotype may need a different kind of treatment than other addicted individuals who carry the high MAOA genotype. More studies need to be conducted before implementing changes in treatment strategies. However, addiction treatment professionals and others who manage addicted individuals, such as probation officers and judges, should be informed of these and other new findings in the neurobiology of drug addiction."

Do you smoke cigarettes daily? Use medindia smoking risk calculator and calculate your reduced Life Span due to Smoking.
Advertisement
In addition, the current study found that the pattern of low gray matter was correlated with the number of years of alcohol, cocaine and cigarette use in the addicted group.

The longer cocaine, alcohol, and cigarettes were abused, the lower gray matter was found in the hippocampus and frontal regions of the brain. This result means that curtailing drug use may be protective against such brain changes.

The scientists recruited 82 men - 40 addicted to cocaine and 42 controls - for the study using advertisements in local newspapers and from local treatment centers.

"Only males were part of this study and therefore it is important for future studies to examine these genetic and brain effects in females as well. Also, further studies will have to be done to track these gene-brain-behavior patterns throughout a lifespan that influence the volume of the brain's neuron," said Klein.

The findings have been reported in the Archives of General Psychiatry.

Alcohol consumption continues to play an important role in many social and religious celebrations.However,serious risks are also associated with it!
Advertisement
<< Collaborative Care Program Lowers Depression in Heart Disea...
Rift Between Indian Purists and Western 'Free-form' at Yoga... >>