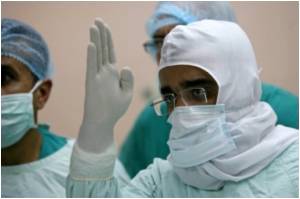 Gaza's health care system needs a shot in the arm , currently plagued by daily power blackouts and shortages of essential medical supplies, according to a report by the International Committee of the Red Cross (ICRC).

"The dire situation in Gaza cannot be resolved by providing humanitarian aid," it said in a statement that faulted both the Israeli blockade and poor coordination between rival Palestinian authorities in the West Bank and Gaza.

"The quality of Gaza's health care system has reached an all-time low," it said, referring to the border closures as "collective punishment" of Gaza's 1.5 million residents.


The report by the Geneva-based group came as Israel mulled its four-year blockade of the Hamas-ruled territory amid international pressure on the Jewish state to ease restrictions following its deadly seizure of a Gaza-bound aid fleet last month.
Advertisement
The Red Cross said power cuts of around seven hours a day "pose a serious risk to the treatment of patients," as it takes several minutes for generators to begin operating.

"As a result, artificial respirators must be reactivated manually, dialysis treatment is disrupted and surgery is suspended as operating theatres are plunged into darkness," it said.

On three occasions in the last year fuel shortages forced hospitals to cancel all elective surgery, and laundry services have been repeatedly shut down, with the situation likely to worsen over the summer, it said.

It also said 110 out of 470 essential medicines, including chemotherapy and haemophilia drugs, were unavailable in Gaza because of a lack of coordination between Hamas and the Palestinian Authority in the West Bank.

"The state of the health-care system in Gaza has never been worse," said Eileen Daly, the ICRC's Gaza health coordinator. "Health is being politicised. That is the main reason the system is failing."

More than 110 of the 700 disposable items that should be available are also out of stock, the ICRC said.

"The only way to cope is to re-use such items as ventilator tubes or colostomy bags, even though doing so can lead to infections that endanger patients' lives," it said.

Israel and Egypt imposed crippling sanctions on Gaza after the Israeli soldier Gilad Shalit was captured by Hamas and other militants in a deadly cross-border raid in June 2006.

The Red Cross has asked to meet with Shalit numerous times but has been rebuffed by Hamas, which is holding the 23-year-old in a secret location.

The blockade was tightened in June 2007 when Hamas drove out forces loyal to the Western-backed Palestinian president Mahmud Abbas, limiting his authority to the occupied West Bank.

Israel has said the closures are necessary to contain the Palestinian Islamist group which is sworn to the destruction of the Jewish state and has insisted it is meeting Gaza's basic needs by allowing in humanitarian aid and other basic goods.

Source: AFP
Advertisement
<< A 12 Pound Newborn in Gujarat
Free Clinics can Do With More Government Support >>

Blocked Gaza Holds Its Own Football 'World Cup'
Passionate about football but cut off from the world, the Gaza Strip has its own World Cup, a ......

Generators Leave Over 100 Dead in Gaza
Generators are the latest killer in war-scarred Gaza being blamed for the deaths of more than 100 .....

Gaza-born Conjoined Twins Can't be Separated: Saudi Doctors
Saudi doctors said Friday that it is not possible to safely separate conjoined twins born in the ......

Hurdles Galore for Would-Be Gaza Migrants
People wanting to quit the Gaza Strip and start life elsewhere are facing a lot of hurdles....