Gauguin, Recently Discovered, to Go on Sale in London 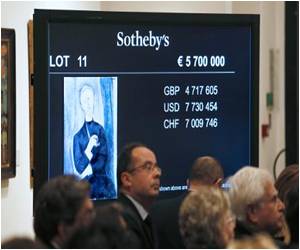 A painting by French artist Paul Gauguin, previously unknown, is now expected to fetch £1.2 million ($2 million, 1.5 million euros) in a sale in London, later this month.

It is thought that the 1884 oil canvas depicting yellow roses, a traditional symbol of friendship, was originally given to a local politician in Rouen, France.


The influential artist was just 36 when he made the work, at a time when he was looking to support his family through his artwork after losing his job as a stockbroker due to a financial crisis.

Pablo Picasso and Henri Matisse both cite Gauguin as an influence, but it was not until after his death in 1903 that he achieved worldwide acclaim.

The painting will go on sale on June 23.

Rio is Not London: Mayor
The mayor of the World Cup venue and 2016 Olympics host said Monday that Tourists who come to Rio .....

Researchers in London to Study Effect of Mobiles on Childrens Brain
To understand the effect of mobile phones and other wireless technologies on brains of children and ...