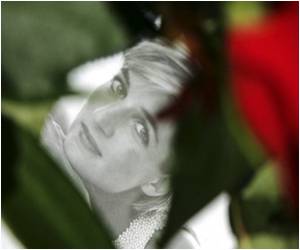 At a London auction ten dresses owned by Princess Diana, including the one worn when she danced with actor John Travolta at a White House dinner, were sold for £862,800.

It was immortalised in the photographs of Diana dancing with Travolta to the song "You Should be Dancing" from his film "Saturday Night Fever".


The dress was bought "by a British gentleman who said he wanted to buy it as a surprise to cheer up his wife", explained auctioneer Kerry Taylor.
Advertisement
The garments, created by some of Diana's favourite designers including Zandra Rhodes, Catherine Walker, Bruce Oldfield and Victor Edelstein, share an extraordinary history.

Some were worn by the princess during official trips to Austria, Australia, Brazil, India, South Korea and the United States, said the auction house.

They were then acquired by Florida businesswoman Maureen Rorech at a 1997 sale to raise money for humanitarian charities supported by the princess, two months before she was killed in a Paris car crash.

Rorech put 14 of the dresses up for sale at a Canada auction in 2011 after declaring bankruptcy, but only four sold as the "reserve prices were ridiculously high", said a spokesman for Kerry Taylor.

All of the remaining items sold on Tuesday at prices ranging from £24,000 to £240,000. Two were bought by an "important" British museum, revealed Taylor.

"It's important for the generations to come," she added. "Diana was the people's princess, so the people should be able to see these dresses. This is our heritage, our history."

Kerry Taylor to Auction Off Princess Dianas Evening Dresses
Ten of the late Princess Diana's evening dresses are set to be auctioned next week at London's ......

Wills-Kat's Baby Could be Named After Princess Diana: Expert
According to one expert daddy-to-be Prince William could name his little princess Diana, in loving ....