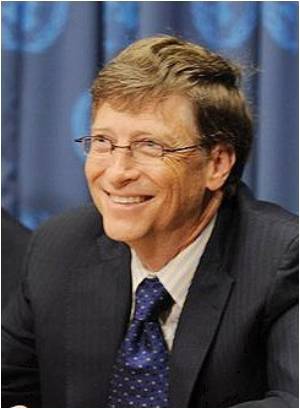 Addressing an event on public health concerns, Gates said his foundation would focus on these areas neglected by companies that eye just profits.

"Our focus is are diseases like Malaria, or TB (Tuberculosis) or AIDS (Acquired Immune Deficiency Syndrome) or trials of diseases whether it's almost no research funding coming out from the profit companies, simply because there is no market for those diseases not large enough to justify the risks involved. And, so we have a particular aim and that's what allowed a lot more TB drug discovery research, TB vaccine research, Malaria research. And in developing countries these infectious diseases are the primary thing that reduces life expectancy and so we'll stay focused on those things because that's where you have this unbelievable neglect," he said.


The Foundation has so far given away 14.5 billion dollars in health grants to organisations worldwide.

The aims of the foundation through the grants are to discover new insights to fight diseases that affect developing countries. It also seeks to develop effective and affordable vaccines and medicines.

Tuberculosis, caused by Mycobacterium tuberculosis, primarily affects the lung. It may spread to other organs.
Advertisement
It has committed approximately a billion dollars for health projects in India.

Gates said the foundation would especially back programmes to check TB.

"With TB, you know we look every year when we look at the number of deaths and we say it's unacceptable and so we are backing drug work, vaccine work, diagnostic work. And, so for me it's very similar I think my Microsoft experience prepared me well for the this foundation work and I'm always learning new things, getting out in the field to see what has impact. So, I'd say at least for me running the foundation is a lot like running a software foundation company

Gates and Melinda visited a village and interacted with people in Bihar on Wednesday.

They were on a daylong visit to inspect various philanthropic projects being carried out under the foundation.

They visited the Simraha and Jamsaut villages in the suburban Danapur area near Patna, and interacted with the locals there.

Bill and Melinda Gates met with some community health workers and state officials to launch a five-year 80 million dollar grant made in partnership with the state government.

Statistics tell us that the world HIV+ population has risen drastically from 8 million in 1990 to a whopping 33 million in 2007! Even more alarming is the fact that young people (below the age of 25) account for half of these infections! This is adequate proof for the lack of awareness among the general public even in these modern times. So take our quiz and brush up on the essential facts of HIV/
Advertisement
<< Critical Care Outside Hospital Across UK
Survey Reveals Priorities for End-of-life Care >>

A-Z Drug Brands in India Nutam (400mg) (Piracetam) Color Blindness Calculator Calculate Ideal Weight for Infants The Essence of Yoga Blood Donation - Recipients Pregnancy Confirmation Calculator Find a Hospital Diaphragmatic Hernia Sinopril (2mg) (Lacidipine)
This site uses cookies to deliver our services.By using our site, you acknowledge that you have read and understand our Cookie Policy, Privacy Policy, and our Terms of Use  Ok, Got it. Close
×