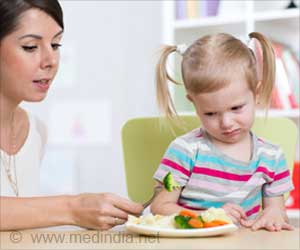 Fear of new and unfamiliar foods can make your child a fussy eater. However, a new study highlights that picky eating in toddlers may eat more unhealthy sugary foods as they become teenagers. The findings of the study are published in the journal Nutrition.

However, the few children who were persistent picky eaters, those who were less able to change and adapt their eating habits, showed pronounced differences in food intake at the age of 13, including a higher intake of sugar, according to new research.

Advertisement
‘What happens when your fussy-eating toddler becomes a teenager? Little picky eaters may tend to eat more sugary foods such as chocolate, sweets, and cookies as they grow older.’
Read More..

Picky eating in toddlers is a well-documented phase when children don't want to try new foods or can show very strong food preferences. It can create much worry for parents, and has created a whole market for advice, guidance, and tools to encourage young children to try lots of new tastes and textures.


University of Bristol researchers examined food questionnaires and records of children in the Children of the 90s study to find out if those identified as picky eaters at three years old had differences in their diet by the time they were aged 10 and again at 13 years old compared to non-picky eaters in the study.
Advertisement
They found that at the age of 10, the diets of picky eaters had similar differences to their peers as they did when they were three years old. Generally, they ate less fruit, vegetables, and meat. By the time they were 13 years old, there were still differences, but they were less pronounced.

Dr. Caroline Taylor from the University of Bristol's Centre for Academic Child Health led the research and commented:
"We know that picky eating is a common behavior in three year olds and is usually resolved by the time children start school. However, very little is known about the diet of picky eaters as they develop into teenagers.

"While we found that there were some differences in nutrition at the ages of 10 and 13, they were not large and are unlikely to have adverse effects on general health and development. However, there was a low intake of fruit and vegetables in the diets of the majority of children, even those who were not picky. I would like to see more support for parents, in general, to help their children widen their food choices at an early age so that this continues through adolescence.

"There should be strategies developed for use in pre-school years to support parents. As well as the development of tools to help identify children who are likely to become fixed in their picky eating behavior so that extra support can be given.

"Thanks to the wealth of information available from the Children of the 90s study over time we're now able to make these conclusions and recommendations."

Source: Eurekalert
Advertisement
<< Try to Avoid These 5 Common Sunscreen Mistakes
Policies of Few Asian Nations on Illicit Drug Use Found to b... >>

Smart Ways to Encourage Healthy Eating Among Fussy Eaters
Do you have a fussy eater at home? Fear of new and unfamiliar foods are a common problem leading to ...

Stress Over Fussy Eating Forces Mom and Dad to Pressure or Reward at Mealtime
Stress over fussy eating urges both mom and dad to use non-responsive feeding practices such as ......

Fussy Eating Toddlers - Blame It on Their Genes, Not Their Parents
Fussy eating habits in toddlers are related to their genetic make-up, not bad parenting or poor ......

Ten Amazing Benefits of Quitting Sugar
Sugars, can tempt your taste buds, however they can be harmful to health in many ways. Check out som...