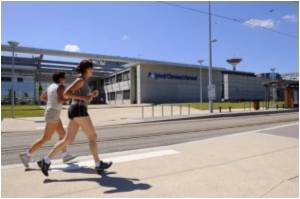 It counted some of the world's greatest sportsmen among its clients, from car racer Alain Prost to Zinedine Zidane.

But the French maker of Booster sports socks, BV Sport, faced the classic challenge of conquering a mass market.

Researchers revealed that a popular dietary supplement known as Carze may contain a meth-like party drug which has not been tested in humans.
Advertisement

BV Sport began out of a collaboration in the early 1990s between Serge Couzan, a specialist in blood circulation problems associated with athletes, and doctor and Olympic ski champion Michael Prufer.

The socks provide calibrated pressure in the calf area so as to speed up circulation, unlike traditional products that placed pressure on the ankle.

Too Much Obsession for Sports can Damage Relationships: Study

An obsessive focus on any sport can deter kids from playing and damage relationships, experts warn adults.
Advertisement
Quadruple Formula One champion Prost was one of the earliest converts to the socks.

"According to him, he won a tenth of a second for each lap" thanks to the comfort of the socks, said BV Sports chief executive Salvatore Corona.

The company also equipped the French football team that triumphed at the World Cup in 1998.

Despite Booster's success, the company based in the Loire valley was going through a difficult period when Corona took over in 2007.

Corona admitted he hesitated before taking the job.

At first "I could not see the interest because, for me, 'varicose veins stockings' were for grannies."

But then he realised his reaction was the problem the company needed to tackle with branding and marketing, and that there was incredible potential as the socks were at that point only being sold to professional athletes.

"When you have the know-how you have to make it known."

So, out with "stockings" and in with "Booster". And their appearance was jazzed up with a more aesthetic design and a range of colours.

Corona's strategy focused on making the socks accessible to the mass market and an advertising push, while still focusing on winning over professional athletes as trendsetters.

Lionel Potillon, a former footballer and now director at the French club Saint-Etienne, said he wore Booster for recovery.

"When you finish a match, putting on the recovery socks accelerates and eases this process, especially as we spend a lot of time travelling on planes or buses," he said.

"It has become indispensible when you know you will have to play every three days."

Today the company takes in four million euros a year and employs 25 people.

Originally it had outsourced all of its production, but around four years ago it brought the manufacturing of its key compression and support products, about 70 percent of its products, in-house to a site near Saint-Etienne where it benefits from some tax exemptions.

"This doesn't allow us to be competitive compared with those manufacturing in China," acknowledged Corona.

However "Made in France" allows BV Sport "to keep quality at an extreme high level while retaining a minimum of competitiveness," he said.

Sports-related sudden death was reported by local emergency medical services and defined as death occurring during or within 1 hour of cessation of sports activity, whether the resuscitation was successful or not.
Advertisement
<< In Decreasing Risk of Mortality, It Is Futile To Use Antibi...
Most Parents Unaware of How Kids' Use Social Media >>