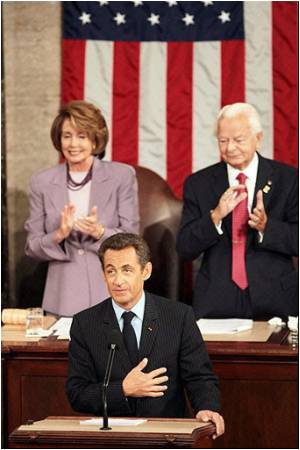 France has taken a tough stand on curbing illegal Gypsy camps following the warning issued by President Nicolas Sarkozy that some in the community were a risk to security.

The move followed crisis talks called by Sarkozy on Wednesday as part of his declared "war on crime" which prompted rights groups to accuse him of stigmatising the Roma, Gypsy and traveller minorities.

In France, Insulting Your Spouse can Send You to the Slammer

Under a new French law, which has made psychological violence a criminal offence, couples who insult each other can now end up being jailed.
Advertisement

Interior Minister Brice Hortefeux said that about 300 illegal "camps or squats" housing Gypsies and travellers would be closed in three months and foreign Gypsies breaking the law would be immediately deported.


"Tax inspectors will be sent to inspect the households of the inhabitants of these illicit and illegal camps because a lot of our compatriots are rightly surprised to see the caravans pulled by certain powerful cars," he added.

To eradicate AIDS, Carla Bruni-Sarkozy, the First Lady of France exhorted the world to contribute billions of dollars through a global tax.
Advertisement
The French government said many in the camps or settlements were involved in "smuggling, exploiting children for begging, prostitution or delinquency".

France will also ask Romania and Bulgaria to send about 20 police officers to the greater Paris region, where many Gypsies live, and proposes sending its own forces to the two countries to fight trafficking.

Anti-racism groups, however, were outraged, accusing Sarkozy of singling out and smearing a minority for electoral gain.

"The Elysee wants to stir fear in order to deploy security measures and a surveillance society," said Dominique Sopo of the pressure group SOS-Racism.

Sarkozy stirred controversy by warning ahead of the meeting that some members of the itinerant minorities posed security "problems", in response to an attack on a police station in Saint-Aignan, central France last week.

Masked rioters tried to break down the door of the station, damaged other buildings and burned cars during the attack, sparked after police shot dead a Gypsy during a car chase.

Sarkozy called the meeting of ministers and police chiefs to review what he dubbed "the situation of travelling people and Roma and the problems that certain members of these communities pose to public order and safety".

Gypsy groups and political opponents said Sarkozy's approach stigmatises minority communities and did not distinguish between ethnic Roma and Gypsies, and the separate community of French "travellers".

"If Nicolas Sarkozy must repeat his declaration of war, the Collective of Gypsy Associations will be prompted to take legal action for incitement to racial hatred," the rights association UFAT said in a statement.

The group said it wanted to meet Sarkozy to discuss a solution for the 400,000 Gypsies and travelling people in France.

Authorities estimate that in France there are about 15,000 Roma, an ethnic group widespread in eastern Europe.

Most in France are thought to be from Romania and Bulgaria, which both joined the EU in 2007. Many live in slums in suburbs such as Aubervilliers on the outskirts of Paris.

There, Socialist mayor Jacques Salvator runs an "insertion village", a cluster of publicly-funded plastic cabins that are home to about 12 Roma families while they wait to be allocated public housing.

Salvator said that "50 projects like this one would be enough to solve the problem in the Paris region."

The cabins are home to Roma such as Dominica Mierriutu, 53, and her husband Mircea, 58, who came to France from Romania and were moved to the "village" from a nearby slum along with their five-year-old granddaughter Rebeca.

"We are lucky. It was a miserable life in the slum shack. Now the children go to school, we have hot water and all that," Dominica Mierriutu told AFP.

Some Roma groups oppose the "insertion" housing system however, saying it fails to help them integrate and find legal work.

A magic drink claiming to reduce drunkenness and ease hangovers launches in France this week, its makers said on Tuesday, prompting scepticism and alarm among experts.
Advertisement
<< Babies Born in Homes at Risk
Woman to Sell Her 6-month-old Baby to Meet Husband's Hospit... >>