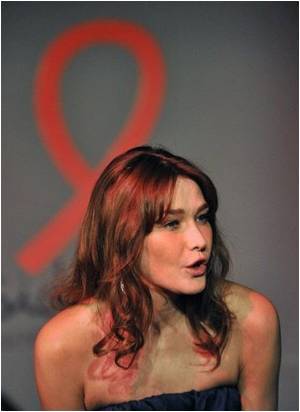 To eradicate AIDS, Carla Bruni-Sarkozy, the First Lady of France exhorted the world to contribute billions of dollars through a global tax.

"We have a historic opportunity," she wrote in the daily Liberation. "In a few years we can eradicate AIDS from the surface of the planet."

The former model and singer is a goodwill ambassador for the global fund against AIDS, tuberculosis and malaria as well as wife of French President Nicolas Sarkozy.


She pointed to recent research showing that people with HIV reduced the risk of handing on the AIDS virus by an astonishing 92 percent while they were taking antiretroviral drugs.

Encyclopedia section of medindia explains in brief about the prevention for AIDS/HIV
Advertisement
The research provides the strongest evidence to date that drugs which treat the human immunodeficiency virus could also be incorporated into strategies for fighting HIV's spread.

"Treating everyone means halting transmission of the virus, in other words stopping the epidemic," Bruni said, "but we must act very quickly."

Calling for a "big effort" from the international community, she said the measures needed would cost billions of dollars a year. "Solutions can be imagined for today and tomorrow," she added, citing an "international tax."

"It's an encouraging signal," she said, hoping that similar action will help to boost the budget of the global AIDS fund when it comes up for renewal later this year.