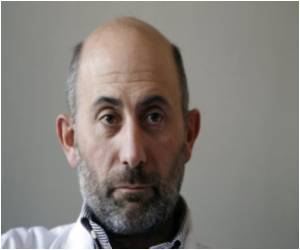 French doctors have carried out a successful full-face transplant -- eyelids, tear ducts and all -- on a 35-year-old man, the hospital where the operation took place confirmed on Thursday.

Doctors carried out the 12-hour operation June 26 and 27 on a patient -- identified only as "Jerome" -- afflicted with a face-disfiguring genetic disorder.

The head surgeon, Laurent Lantieri, described the surgery as a world first because it included a difficult and unprecedented transplant of tear ducts and eyelids.


A similar procedure carried out in Spain earlier this year replaced most of the face, but not the tear ducts.

Lantieri, who has already performed four other partial or nearly-complete face transplants, told AFP before the operation that reconnecting tear ducts and replacing eyelids was the "extremely challenging."

"My patient is doing well. He is walking, eating, talking. His beard has started to grow back on his new face," said Lantieri, who operated on Jerome at the Creteil Henri-Mondor hospital in the Paris suburbs.

"The first time he looked at himself in the mirror he stuck both thumbs up," he told a local newspaper, the Parisien. "He was waiting for this transplant for two years. He is very happy."

Lantieri's team operated on another patient suffering from the same genetic disorder, a type of neurofibromatosis called Von Recklinghausen's disease, in 2007.

In that case the tumour was so massive and hideous that the man could neither eat or speak properly.

Less then 13 months after the transplant, however, the man was working fulltime and considered himself to be reintegrated into society.

A face transplant involves the removal of the entire face from a corpse, including mouth and eyelids, and grafting it onto the patient. Nerves and blood vessels are connected under a microscope.

"We are the first to have done a full-face transplant including eyelids and tear ducts. I am proud because this has been done in France," Lantieri was quoted as saying.

The surgery required a team of ten people, fewer than for previous cases, he added.

Other doctors have also claimed to have carried out a similar operation.

In April, a 30-strong team at the Vall d'Hebron University Hospital in Barcelona said they had conducted a full-face transplant on a young man disfigured in an accident.

There have about a dozen partial or complete face transplants recorded to date, five of them -- including the first, in 2005 -- in France.

In that landmark operation, 38-year-old Isabelle Dinoire received the nose, lips and chin of a donor to replace parts of her face that had been mauled by a dog.

The procedure was conducted by Bernard Devauchelle, a professor of facial surgery at a hospital in Amiens, northern France.

The first face transplant outside France took place in China in 2006 on a patient mauled by a bear. The man died two years later, after he stopped taking medication to prevent his body from rejecting the graft.

In April 2009, Lantieri and his colleagues also claimed another world first for replacing part of the face and both hands of a man in a single operation.

A face transplant is considered one of the toughest surgical tasks. It combines micro-surgery to connect nerves and blood vessels and a high risk of rejection by the recipient's immune system.

"Beyond the grafting itself, these transplants are going to teach us a lot about numerous other areas of such as immunology," Lantieri said.

Spanish Hospital Claims to Have Performed First Complete Face Transplant
A Spanish hospital said Thursday it performed the world's first complete face transplant in March on a man who could not swallow, breath or talk normally following an accident five years ago.
READ MORE

First US Face Transplant Recipient Revealed
An Ohio woman who was the first US recipient of a near-total face transplant unveiled the results of her surgery which restored key features after she was shot by her husband five years ago.
READ MORE

World's First Face, Hands Transplant Patient Dies
A Frenchman who underwent the world's first face and double-hand transplant in April after being disfigured in an accident has died, hospital officials said.
READ MORE