For Minority Seniors Living In Ethnically Dense Area Is Beneficial 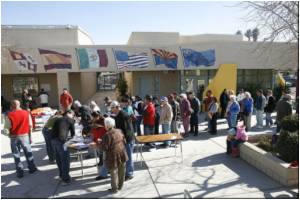 A Mexican-American or African-American senior is less likely to have cancer or heart disease if he lives in a community where many neighbors share their background.

Intake of alcohol in moderation also likely to raise the risk of atrial fibrillation (AF) among patients with cardiovascular disease.
Advertisement

Counter to prevailing notions, researchers found that "living in the barrio or ethnically dense communities isn't always bad for your health," says Alvarez. "For older minority adults, it's actually the reverse: living in an ethnically dense neighborhood is beneficial when it comes to heart disease and cancer," adding that these are the two most common chronic conditions and causes of death among minority older adults.

Obesity May Contribute To Cancer Growth

A new link between cancer and obesity has been found by Investigators at The University of Texas Health Science Center at Houston (UTHealth).
Advertisement
Cultural factors could help to explain the phenomenon. "Communities with high ethnic density may be more likely to share values like respect for elders and have close-knit family structures," says Dr. Levy. Earlier studies showed high levels of social support within communities of Hispanic immigrants. "These networks may facilitate better health behaviors and, in turn, better health outcomes," adds Alvarez. "For example, information about free health clinics may be more freely exchanged in these communities."

Past studies showed a health benefit of ethnic density for Hispanics, but the reverse for African-Americans; these results were in keeping with what is known as the Hispanic Paradox: that even with similar levels of socioeconomic status, Hispanics have comparable, or in some cases better, health outcomes than White Americans. Adding a wrinkle to this rule, Alvarez and Dr. Levy are the first to find a positive effect for ethnic-density among African-Americans. The difference, Alvarez explains, may owe to the fact that past studies have looked at African-American children and young adults rather than seniors and measured ethnic density in relation to whites rather than within subsets of other minority populations.

"Having this information is important given the rapidly growing population of older adult minorities," says Alvarez.

Noscaphene (Noscapine) The Essence of Yoga Turmeric Powder - Health Benefits, Uses & Side Effects Pregnancy Confirmation Calculator Color Blindness Calculator Find a Doctor Vent Forte (Theophylline) Iron Intake Calculator Diaphragmatic Hernia Sinopril (2mg) (Lacidipine)
This site uses cookies to deliver our services. By using our site, you acknowledge that you have read and understand our Cookie Policy, Privacy Policy, and our Terms of Use