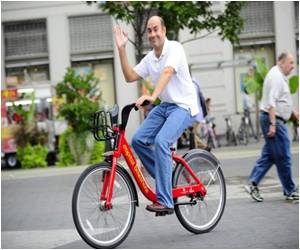 According to a new University of British Columbia study on the eve of Vancouver's Bike to Work Week, certain types of routes carry much lower risk of injury for cyclists.

The study, published today in the American Journal of Public Health, analyzed the cause of 690 cycling injuries in Vancouver and Toronto from 2008 to 2009 and various route types and infrastructure.

Swedish inventors have come up with a neck airbag to protect cyclists in case of a crash.
Advertisement

The greatest risk to cyclists occurs when they share major streets with parked cars, with no bike lanes present - like on Broadway in Vancouver or Dundas Street in Toronto. Without a designated space on the road, cyclists face a heightened risk of injury from moving cars and car doors opening, according to the study.


In contrast, infrastructure designed for cyclists - including bike lanes on major streets without parked cars, residential street bike routes, and off-street bike paths - carries about half the risk, while cycle tracks (physically separated bike lanes) carries the lowest injury risk for cyclists, at about one-tenth the risk.

More than 80 percent of bike share cyclists are putting themselves at health risk by not wearing helmets, shows study.
Advertisement
"Cycle tracks and other bike-specific infrastructure are prevalent in the cycling cities of Northern Europe, but have been slow to catch on in North America," says Kay Teschke, a professor in UBC's School of Population and Public Health and lead author of the study. "Adoption of safer route infrastructure would prevent crashes from occurring in the first place, while encouraging cycling. Since cycling offers major health benefits, this is a win-win."

Teschke says that increased injury risk also exists with streetcar or train tracks, and where there is construction. "There is renewed interest in streetcars for urban transportation, and the associated tracks were found to be particularly hazardous for cyclists," she adds. "There is also higher risk when construction impacts road traffic. Safe detours for cyclists need to be provided."

HGVs pose the greatest risk of death and grave injury to cyclists, proven by means of study by researchers at Queen Mary, University of London and Barts and The London NHS Trust.
Advertisement
<< Dengue Cases Climb To 1,412
For Minority Seniors Living In Ethnically Dense Area Is Ben... >>

Experts from the UK have shown in a new research that people who cycle through London and other major cities have higher levels of black carbon in their airway cells.
Advertisement
News A-Z
A B C D E F G H I J K L M N O P Q R S T U V W X Y Z
What's New on Medindia

Accident and Trauma Care Turmeric Powder - Health Benefits, Uses & Side Effects Blood Donation - Recipients Drug Side Effects Calculator Find a Hospital The Essence of Yoga Vent Forte (Theophylline) Blood Pressure Calculator Hearing Loss Calculator Indian Medical Journals
This site uses cookies to deliver our services. By using our site, you acknowledge that you have read and understand our Cookie Policy, Privacy Policy, and our Terms of Use